(UNIVERSITY OF SALFORD NEWS RELEASE May 2012)

The often unheard stories of homeless people in Manchester will be given a voice this month thanks to a collaborative art installation going on display at the University of Salford’s building at MediaCityUK.


I LIVE TEMPORARY is a digital artwork created by more than 200 homeless people, with the help of North West-based arts organisation arthur+martha. It combines sound recordings, customised postcards and an epic Twitter poem to portray aspects of the lives of homeless people in Manchester.


Participants spoke of the difference the project has made to them: “I feel that I’ve been heard now. This morning I was invisible. Now I know someone knows I’m here.” and “People who are classed as ‘normal’ don’t get to see our world. This opens their eyes.”


Run by poet Philip Davenport and artist Lois Blackburn, arthur+martha works with people who many perceive as at the margins of society, including older people in hospital, children with special needs, excluded school pupils and young carers.


Philip said: "The cards and Twitter poem are an extraordinary document of lives that are unnoticed. There is lost innocence, lost families, lost love. There's yearning, for shelter and kindness. And there's resilience. Finally, many people told us that most of all they want acknowledgement - to be seen."


Amanda Croome MBE, Director of the Booth Centre for homeless people in Manchester, added: “I found it amazingly powerful to see people express themselves with such feeling – and to get to know people we work with in a different way.”


University Events Officer Harriet Morgan-Shami said: "This type of work, which uses digital media to engage with and represent a marginalised community, is an exciting approach which we hope will generate dialogue and inspire thinking around how our students, staff and creative partners can reach new audiences through their digital practice.”


I LIVE TEMPORARY will be brought to life in the ‘Egg’ digital space at the University’s MediaCityUK building, using an array of ultra-high resolution screens and audio, from Friday 11 May, running until Friday 1 June. 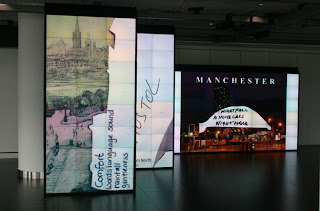 * Project supported by Arts Council England and the Text Festival at Bury. Partners include the BBC, The Booth Centre, The Big Issue in the North.
Posted by Philip Davenport at 02:24

Email ThisBlogThis!Share to TwitterShare to FacebookShare to Pinterest
Labels: a map of you, arthur+martha, exhibitions, homeless, North West, The Big Issue, The Booth Centre, the warm and the cold