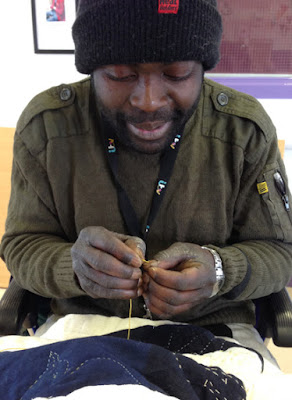 The day we handed over

"Two years ago you wouldn't have got me in a room like this. I would've run a mile." Danny

We've taken The Homeless Library to various public places with great pomp attached, the Houses of Parliament come to mind. Always the readings by people who've experienced homelessness are the crucial moment, after Lois and I set the scene. But this was the deepest we've dived, the most fragile  that we've allowed ourselves to be in public. Both Lawrence and Lois wept as they read. I caught Danny's eye at one point and it was as if I was looking into a sea of sadness. And yet we made it through. And it was Lawrence who threw the lifebelt and pulled us out.

It was the day that the balance changed. The makers of The Homeless Library are now leading the discussion. Not only did their voices come through loud and clear, so did their insight. They knew homelessness, the support services, the poem making. And they shared this expertise, without sentiment, but with kindness and generosity. It wasn't just the mechanics of the poems, it was the heart of the poems that they took us to. And yet they kept the ambiguity: "I wrote this and then I read it again and I thought I don't know what it means but I keep coming back to it." (Lawrence)


What was it about today? When we started to talk Lois and I had set the agenda. By the end of the discussion, it was led by Danny, Lawrence and Christine. We couldn't possibly speak for them and frame their experience. In fact, it suddenly overwhelmed us all.

It was Lawrence who saved us. He was the parent in the end. Not only was he looking after us, the panel of five, he wanted to make sure everyone in that room left with hope. It was an act of absolute generosity. This was not a politicians' answer, it was not a dry answer. He was trying to see people's faces, read their eyes, and to answer their need.

Danny has been the ballast of many of our sessions. His kindness and calmness settled many people down so that they could write or make art with us. I cannot put into words the contribution he has made to this strange word construction The Homeless Library. He has also written pieces of work that were ruthless in their honesty and which have touched many people. Today he came to a university and spoke to a room of professors and PhDs and artists and by the end of it he was giving people advice on how to write.


Christine was with us both as a support worker and as a person who has experienced homelessness and found a path through. She never pushed herself to the forefront and wasquietly looked after the situation, with a sense of humour and a sparkle. She is on the door at the Booth Centre and manages situations every day that are the most chaotic (and potentially violent) that can be imagined. Today she read in public for the first time. She read beautifully, and instead of being the professional look after-er, she was the artist.

Afterwards, one of the festival organisers, took us to one side: "Hearing these people speak and seeing this work affected me. And it did the same to several other people I've spoken to. It made me think about how we do what we do, I'm thinking about my practice, how I make poetry. It's also made me think about what is happening in this country right now." (Professor Jeffrey Robinson)

The Homeless Library was presented at the Outside In/Inside Out festival of outsider poetry at Glasgow University. We were delighted that Jerry and Diane Rothenberg and John Bloomberg-Rissman were able to hear the presentations by Danny, Lawrence and Christine and talk with them. The Homeless Library is an offshoot of our project TWEET FROM ENGELS, which was included in the anthology of outsider poetry Barbaric Vast & Wild, edited by Jerry Rothenberg and John Bloomberg-Rissman, the festival is centred on a celebration of that book. We would like to thank the organisers Jeffrey Robinson,  Nuala Watt, Colin Herd and Nicky Melville for their warmth and hospitality.

Posted by arthur+martha at 02:22 No comments:

This coming Thursday arthur+martha and a group of people from The Booth Centre, (A day centre offering support, advice and activities for homeless people in Manchester) will be presenting an exhibition of our project The Homeless Library to 'Outside-in / Inside- out' a festival of outside and subterranean poetry in Glasgow.

All events associated with the festival are free and open to the public. Some have limited capacity are are expected to book up quickly. See https://outsidepoetryfestival.wordpress.com for details. 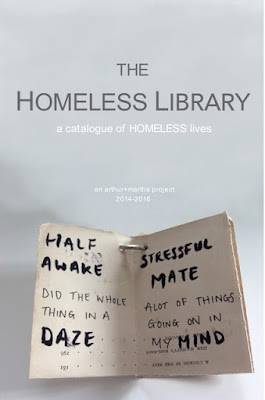 The Homeless Library project is supported by the Heritage Lottery Fund.
Posted by arthur+martha at 06:01 No comments: