His heart is ripped in two places

Like many we people we have met on the project The Homeless Library Simon shared his painfully honest description of drug miss-use with the hope that it might help someone else going through the situation themselves, or perhaps help to prevent it happening in the first place. arthur+martha's desire is also to share with the wider world voices that might otherwise be un-heard and perhaps challenge our preconceptions and stereo types.

"There's always someone worse of.  Got a brother Tom, he’s lost his wife, daughter, if you gave him a million pounds he’d spend it on heroin. His heart is ripped in two places.

Grief, the stress of my mum being ill and dad dying of cancer, when I was doing the detox all the memories came back. You have to want to come off it, no one will ever make you. I didn’t care about anyone but myself. You have to have something you care about to get off the heroin. It will just swallow you up. Three of my friends died last year.

The devil drug they call it that for a reason. 39 years old and I missed out on having kids. The natural family unit you miss out on. You crave the normal life, its not to much to ask for to sit on a Sunday watching tv with your misses and the kids. You miss it all. It’s a horrible drug, run a mile and keep running, the most destructive drug. 11 years I’ll never get back, it’s a daze, a dream, you don’t know if you’re coming or going.

Carol (my partner) was an ex-user, that’s how we met. One daft day I went to my brothers and met me partner. She was completely clean, I thought if she could do it anyone could. She’d been on it for 12 years, the drugs get into your bones. She said ‘if I want off I’ll help’, we sat up and talked all night. I wanted to get off- 6 weeks she locked me up, had the runs, aches, pains, sweats, she nursed me through. It was the emotional side that was the worse, the drug blocks emotion out. You start getting your nerves back to life- in your fingers, in your private parts.  You get symptoms after trying it a few times, aches, pains, like having the flu.

26 when I first tried it. A group of people trying it and everyone was talking about how good it was. You got to be part of the group, like a gang at school ‘try it’.

I’d only had cannabis before, heroin was the poison for me. Crack cocaine  didn’t click with me, 95% of people take heroin to bring them down, crack for a high. I know people who pick scabs and holes into their faces with crack, they will pick pieces out of the wall thinking its crack, its mental, in your head- heroin is more physical, more to get off.

If I see someone homeless now asking me for money- if they refused food I know they weren’t properly homeless, I wouldn’t had money over- I’d offer paracetomol if they needed a painkiller. Would never hand money over. Two times a week there will be people handing round methadone strips, trying to help.

Nothings bigger than family, keep going back even if they scream, never give up. Before I knew it four members of my family had died, when I was on the streets. You miss out on life, so high on your life, you don’t get a chance to say goodbye. Keep fighting, there is nothing more important than family. I didn’t even know my dad had died. My sister told me two weeks after. The last words you speak are the last ones, you cant change that.

Listening and talking helps- talking to you helps. Loves to you all.

Its going to be my first proper Christmas, I’m even cooking Christmas dinner for my partner.  The first I can remember, Christmas under a roof with someone I love."

Posted by arthur+martha at 08:30 No comments:


The majority of arthur+martha CIC projects artworks and poems are made in collaboration with others. In the case of The Homeless Library, those others are homeless men and women and other vulnerable people in our society, those with mental health problems, substance and alcohol abuse, the lonely- using contemporary 'soup kitchen's'.

Sadly we have met many ex-military personnel during our project. Warren we met at The Wellspring, Stockport. During our encounters he gave articulate, passionate, at times angry accounts of the many ex-military he has met on the street. The stories he channeled into poems and wrote into handmade books. Next year these will be shown alongside many of the other artist books, recordings, poems, interviews in a touring exhibition.

Warren wrote 'Wasted Youth into a folded book, inside the cover is a photo of Warren graduating.  The cover is an illustration of a soup kitchen during the Crimea War with the words written 'I've been lost all over the country, everywhere.'

You can read more interviews with Warren here. Thanks again to Warren and all of the men and women we have met during the project who share their stories.
Posted by arthur+martha at 02:45 No comments:

Getting back to normal

I have been interviewing people at the wellspring over the last three weeks.  All their stories have been told with candour and a generosity of spirit.

So many of the men I have spoken to haven't spoken to anyone about their circumstances before, told their story.   The self reliance and lack of expectation of anyone to do anything to help is a common thread.

These men aren't waiting for help, they want to ‘get back to normal’ and get on with their lives.  I don't know if that is a result of being let down in the past or if it's more to do with not wanting to admit you might need help, you might need to talk to someone. Pride? They are all just waiting for a better day ‘I just want to be like I was two years ago’ (Phil)

The other reoccurring theme in these interviews has been long term loneliness.  Disconnected because of the transience, bereavement, broken relationships, substance misuse many have said they have few friends and some have nobody to confide in.

Some are to embarrassed to let family and friends  know that they are struggling so they avoid contact, hide if them seem them on the street.

What they have at the Wellspring  is community, somebody to talk to, to have a chat, and a feeling ‘that someone gives a damn’ (anon).

Posted by arthur+martha at 01:40 No comments:

We're in Buxton library for our quilting project Stitching the Wars. This has been a two year journey through hundreds of Derbyshire people's memories. Reminiscence about the world wars and the effect that war had on farming communities has been written down - sometimes as oral history, sometimes as poetry - and then stitched into quilts.

The pieces have great power and richness, to our eyes - but what do other people think? These last two days have been an open editing session in which Lois stitched together the patchworked reminiscence while I edited poems. Three enthusiastic volunteers helped with the huge stitching job. Meanwhile, library users and staff came over and commented on the work in progress. We were nervous about this public debut for the quilt-in-progress, but needn't have worried. The response was warm hearted, curious and delighted.


The quilt deals with difficult subject material, poverty and strife. But the colours and the sumptuous fabrics contrast with the theme, playing against type so that this piece is one of the most charming things arthur+martha has ever made for the eye. The dazzle of it certainly seduced many of our early-doors audience. However, the text interwoven through it is a more uncomfortable proposition and has yet to be completed. Perhaps there is still a little room for some nervousness... 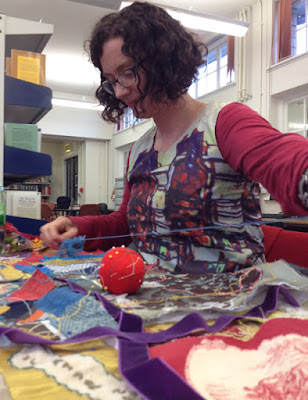 Posted by arthur+martha at 01:27 No comments:

A Celebration of Landscape

We are delighted to share the news that our quilt 'A Bomber's Moon', is currently on exhibition at Lyme Park, Cheshire as part of their Winter Exhibition, Lymescapes.

arthur+martha artist Lois Blackburn, will be an artist in residence at Lyme Park Sunday 6th December.