A farewell to arms

Peace is one of the great Christmas cliches. It’s a word that’s scattered across greetings cards like so much glitter. But there is a reason for cliches: they contain a glimmer of truth. To find deep peace within and without can be hardest fight of all. This year we worked with many people who had come through conflicts, either wars, or deep internal strife. Often, the two are linked. 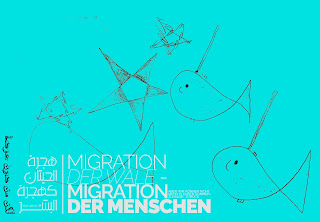 (Translation, from German/Arabic) MIGRATION OF WHALES = MIGRATION OF PEOPLE / BUT WE CANNOT RETURN TO OUR SUMMER HOMES

Phil’s project in Berlin was with a refugee community. He ran several months of artmaking workshops with children. The artworks were made then shown to adults in their community, whose responses became the text of the posters: short, poignant poetic statements, counting the human cost of war, subtle losses including childhood itself.

This exhibition of poster-poems opened in October, at Paul Schneider Hause in Spandau, Berlin. The exhibition proved popular and was extended until the end of December, when we are delighted to say it was awarded a commendation by the mayor of Spandau, on behalf of the city of Berlin.

Meanwhile, Lois led our Armour project in the UK using words and stitches to explore the ways we protect ourselves. It was a collaboration with veterans of armed conflict and with people who have lived experience of homelessness. We asked people to describe their personal "armour", physical and mental. The final textile artworks were inspired by gambesons, the quilted jackets worn under suits of armour, which we made out of rust dyed fabric, embroidered with poems, and other writings. These stitched pieces echoed armour and more subtly alluded to healing, the stitching of wounds.

We would like to offer our thanks to everyone who met us, talked with us, worked with us, laughed with us, helped us over the last year. We wish you respite, safety, happiness. And peace, peace, peace.

Posted by Philip Davenport at 11:22 No comments: