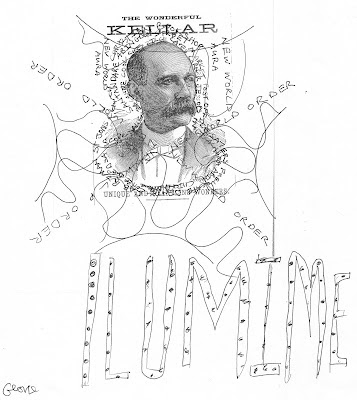 “I love to look at old photos. They compel you to look, they're so beautiful. But there's something eerie too. The people look back out at you, straight into your eyes. You wonder what they were thinking at that moment when the camera clicked.” (D)

The morning and afternoon sessions were a trawl through the photograph collection at Blackpool local history archive, with the guidance of librarian and inspiration Tony Sharp.

We were looking for accidental findings that sparked an emotion, a thought, a forgotten face or gesture. Little illuminations, in other words.

People looked at these eccentric traces of other humans and found shards of their own lives reflected. The process of hunting through the images brought great delight. We were smiling as we searched the bric-a-brac. Once images had been selected they were photocopied and people wrote their responses over the top of them, threading words through the shape of the image.

“I love to do this; the creativity makes me alive. Drawing, writing, painting. It's been uplifting.” (Anon)

Tony talked us through a selection of the images and brochures. The photos in this particular collection are remarkable because they document the razzmatazz of old showbiz and the human quirkiness that Blackpool is a monument to. A great deal of money, care and pride has gone into these artefacts. The brochures from the 1920s and 1930s are wonderfully elegant designs. And then there are the 'freakshow' photos that seem barbarous now. The pictures of long-gone celebrities are artfully posed black and whites, often touched up to make their sitters appear uber-perfect.

Yet somehow they are poignant in all their finery. It is this delicacy that touches most deeply, because ultimately photos are encounters with time.

This piece of writing was a response to an old back and white photograph of a fan dancer in an old variety show. 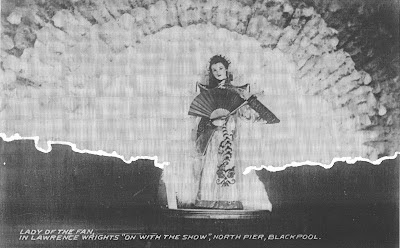 I've been told I've a vivid imagination, a way with words:

pink christmas snowflakes, a complete fairytale - have you heard of an epiphany? - every bit of whirlwind is coming through my mind - not searching, as it were, like no tomorrow – it's a fairytale giant-ly elated – I picture glitter and angelic sparklings in waves that stand still – all the truth of the world coming through all of the pain – you name it, moon, stars and everything else

(did I tell you I have a lot of phobias?)

“I was really worried about this afternoon. I nearly didn't come, I thought I might just hang about in the library. But I managed it. And it was good, you know. More than good.” (O)

We've been planning a walking excursion over to the legendary Winter Gardens from the get-go, as part of our project. Moving locale often brings creative stimulus. And the subtext is that folk who might habitually exist in very limited boundaries (for example, shut up in the house for years) are encouraged to sample a little of the outside.

We went into this expedition very cautiously, expecting few takers. In the event, we'd a large and rumbustious gaggle, who eagerly set off down the High Street. I noticed that people put on their social 'masks', as expected, which meant that this was not the occasion for sensitive or self-revealing work. But actually I wanted them to push in the opposite direction this time, to become Barbarians.

For visitors like myself who have no particular knowledge of Blackpool, the Winter Gardens is a gleeful discovery - an art deco palace, dedicated to entertainment in the long-gone style. Dancing, theatre, cafes, an indoor hanging-garden – all soaked alcohol and wrapped up in rather exquisite architecture. It's got something of the Crystal Palace about it and a little bit of Butlins.

We settled in a bar that had been built in timbers to impersonate the interior of a pirate ship. I invited our party to work into some pages of Mallarme's Coup de Des that I'd brought along, the tale of a shipwreck. They were encouraged to this this with utter disrespect for their source material, to STEAL and to be generally piratical on paper.

The resulting hilarity, chit-chat and creative bustle was a pleasure to witness. I felt a tremendous pride for this little band and this moment of victory, won in the middle of other more difficult moments.

“It's helped me to be here. I've had a terrible week, really terrible. I can't believe that I've managed to laugh today.” (D)