Kathputli, a rag doll and a widows bindi

As part of the project making memories arthur+martha are working in a Hindu Temple in Oldham, devising new ways of working creatively with reminiscence boxes. Yesterday I took in some dolls I was given as a present many years ago. I knew they were Indian, but nothing else about their heritage. I was interested to find out what memories they sparked. The following notes share some of the groups reminiscence.


The dolls are usually in pairs, they are Kathputtey (or Kathputli) a puppet like Punch and Judy from Udaipur in Rajasthan. The puppet show tells a story, a traditional tale. Their hands, feet and head are controlled with thread. Kathputali means statue made from wood. Its beautiful, at night you have an hour show, all professionally done.

(Vimra) We couldn’t afford dolls, so my mum made a hand made doll- everything was handmade, using all sorts of materials, including wood.

I remember my favorite was a metal stove made for us, you could cook on it, it looked like a miniature barbeque, no more than 4inc’s with drawers you could pull out in the side. My parents would put coal in it for us, and we’d make tiny pures. We had skipping ropes and marbles and stones to juggle and flip on the palm.

I grew up in Kenya, Mombassa. We had rag dolls stuffed with old cloths… saris and socks. It was a pink doll with an egg shaped face. The eyes, nose and mouth were painted and sewn with different coloured thread. No clothes just its pink body. 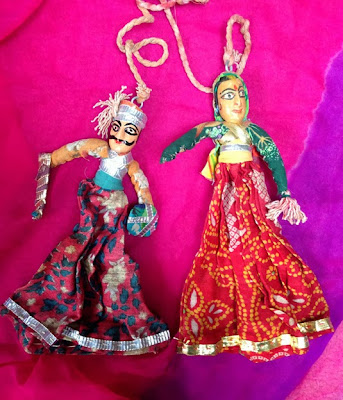 (The female doll has a bindi painted onto her forehead) The bindi, is the symbol of a married woman, sometimes worn with some colour in the hairline. Now its become like fashion, now the colour matches the clothes, the sandals, bangles... traditionally it’s red, an auspicious colour, the main colour for weddings. In different parts of India, different colours, green in some parts of India, and in Maharashtra the widows have a black bindi, in South India widows have sandalwood bindis, in some parts of India a widow can’t wear a bindi at all. In the villages widows still wear black or white clothes and she’s not allowed colourful bangles, only gold.

My aunt was made a widow in her 20s, she wore white all her life, we felt awful for her. When my husband passed away, she told us not to wear white.

Gold is the tradition, for a ‘rainy day’ as well, it’s a type of savings. You sell in emergency. We need so much gold when you get married, a daughter is given a lot of gold, a dowry. When the father passes away, she doesn’t get a share, she has had the gold already.

Gold had to be passed down. The mother-in-law shares gold between all the girls, daughters, daughter-in-laws.
Posted by arthur+martha at 06:56