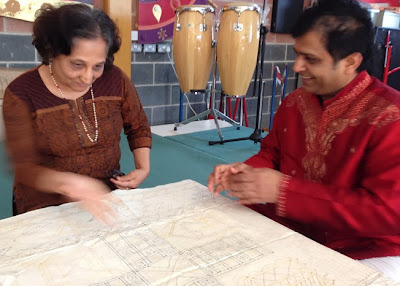 Today was all about a tablecloth. We're running reminiscence art sessions at a Hindu Temple in Oldham, exploring the power of objects to evoke memory. It's our first project with the Hindu community and there's much to learn, as the tablecloth demonstrated.

It was bought by Lois some 20-or-so years ago when she as a student. On it are are series of stitched designs that sketch the outline of a pattern, to be embroidered to your own taste. (rather like the flower embroidery transfers for tablecloths, popular in the UK in the 1930s and 40s). I showed the tablecloth to Trupti and she began to decode it for me. In the middle are the squares of a game, a little like Ludo but much more complex, which can be played after the meal is finished. The game Chaupad (English spellings vary dependent on who is translating) makes an appearance in the Mahabharata and is well-known throughout India, going back many centuries. In legend, a king who is over-fond of gambling is duped in the game and loses his kingdom.

The cloth can double as a wall hanging – if you hang it vertically, it becomes apparent that it is the outline of a house. Two girls play outside and above are two peacocks. The squares of the game have become windows. Patterns like this appear on the walls of many houses in India. The house that Trupti lived in was decorated in this way too – the wall decoration in her house was dated 1756. It had lived not only in her minds-eye, but in the eyes of many, many others who'd lived there.

At this tablecloth the family meets, eats, plays, prays. As Trupti talked, more and more layers of memory were uncovered and we journeyed with her across the vast expanse of this small, seemingly simple piece of cloth. 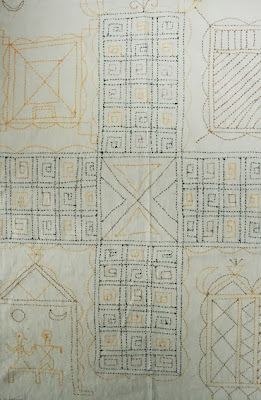