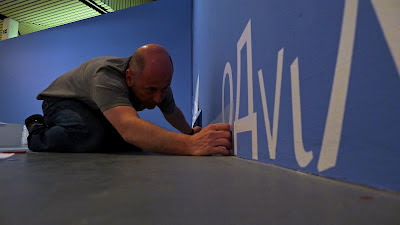 Visual poetry by Philip Davenport, at Turnpike Gallery, Leigh, UK. April 3-14. This exhibition questions the idea of a BIG society by focusing on the voices of the little and the lost.

Davenport’s poems APPEAL IN AIR and POLLINATORS OF EDEN erupt from the page into dizzyheaded sequences of word/space, spilling across the large gallery. Rhetoric of politicians is replaced with uncertainty.

APPEAL IN AIR is a celebration of quiet voices, the people at the fringe - and the songs of birds. Texts bend into the shape of birds and weave a city skyline. Children mimic birdcalls as a soundtrack for the space. Language morphs into code: Davenport’s poem is a song of “Liquid morse.” APPEAL celebrates the many voices, languages and un-languages that make up a world – including those that get lost in noise. 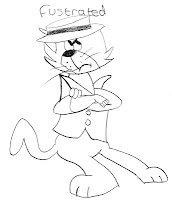 POLLINATORS OF EDEN replays the form of a child’s educational book, complete with an instructional animation of a drowning shark. The piece documents encounters with people in North Manchester, an area of stark economic hardship, and is cartoonishly illustrated by local school pupils, in bright counterpoint to the dark tone of the poem.

Much of the material in the show derives from Davenport's recent book APPEAL IN AIR, published by Knives Forks & Spoons Press, which subverts the form of the spreadsheet into an expressive tool. 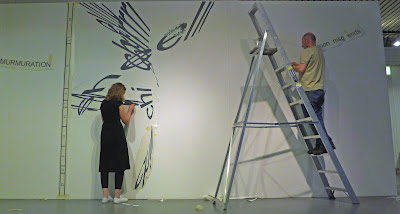 Davenport’s debut was published by seminal avant-garde press Writers Forum in 1999; his poems written on apples were shown at the 2004 Liverpool Biennial. His work has been variously billposted and exhibited throughout Europe and in China. Davenport co-curated the largest survey exhibition of Bob Cobbing’s work for Bury Text Festival in 2005 and the first posthumous gallery exhibition of Ian Hamilton Finlay’s work in 2006. He often collaborates with other artists and writers, including Ben Gwilliam, Lee Patterson, Tom Jenks. His spreadsheet poems were recently exhibited in the Henry Moore Institute. APPEAL IN AIR is published by Knives Forks and Spoons press, UK whose list includes many British avant-garde poets. Davenport is currently compiling an international anthology of text artists and poets. 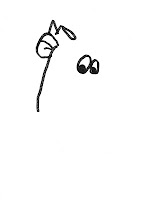 Hi there, just wanted to thank you for doing this, myself and my daughter have really enjoyed makin the shapes and thinking of the right words and shapes that would make ours really personal.

You may remember I took your photo before leaving on monday, if you go to http://www.flickr.com/photos/beeblebear/7041931533/in/photostream you can see it. I'd really like to know if you like it - I kind of tried to edit it in a way that was guided somewhat by the notion of art and words.