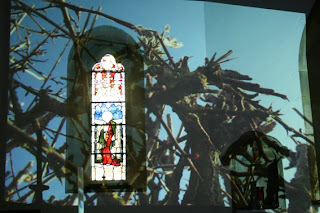 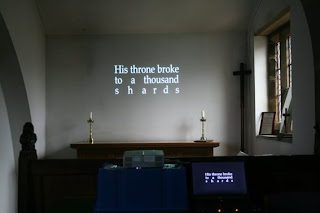 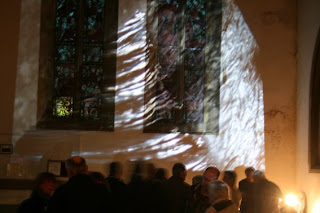 After a hectic gathering of materials, photos, text and sounds, on Sunday morning we arrived at St James the Less, New Mills, to form the gathering event. With the invaluable help of David Bell from High Peak Community Arts, Peter Inman and the Friends of St James the Less, we put together a exhibition event, showcasing some of the work produced in the previous workshops and walks.

About 80 people came to the event at St James the Less on Sunday, and viewed, listened and took part in the performance. The atmosphere developed as the evening brought darkness, the projected images became clearer… Reminiscence/poetry from older people in New Mills, had been laid out in the form of concrete poetry, and placed in booklets around the church. Photos taken by participants in the walks, and selected texts where projected on walls throughout the church- some distorted by the church interior itself- the physical presence of the church creating another collaborator. Occasionally a visitor or participant would become part of the projection, walking across the image, creating a moving photo, adding to the effect of layering and shadow play. This was particularly effective during the wonderful performance from the High Peak Community Arts Choir, whose song sheets and clothes became temporarily decorated with images of trees, branches and thorns.

Experimental sound recordings where played throughout the church, playfully such as water sounds hidden in the font, or more challenging sound/scapes played through headphones working with the directional signs. Sounds of children and birds floated through the church, bringing the outside in.

Candles with further text/art where placed on a window sill, bringing a detail of flickering light. The combination of sound, text, photo and perhaps most important the church itself, combined to create a unique atmosphere and experience.

Thanks to High Peak Community Arts, Friends of St James the Less, The Volunteer Centre, The 60 Not Out Group, New Mills Primary School, the Derbyshire Community Foundation, the HPCA choir, artist Simon Byford, Arts Council England and all the participants in the art/text/sound workshops.