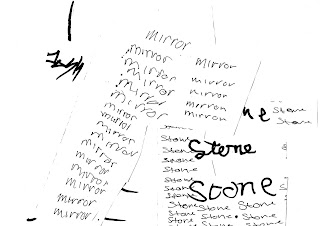 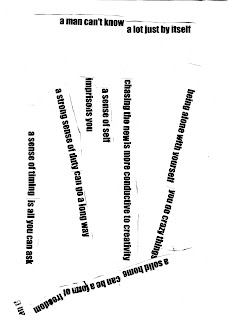 The lively morning lot didn’t fail to disappoint me with their interpretations of what I was asking them to try and do, though the fact that it was written based presented me with all sorts of different groans.

The first activity was one that nearly all took to well, and that was writing with either the eyes closed or with the other hand, and some opted for both. I whispered a secret word and they had to repeat what they were writing until I called their time.

However, many showed reluctance when I tried to get them to write more than just this word.

It was the lads that came up with the goods and provided some beautiful lines by collaging together words to create their own poem. Lines such as “basic insecurity is scary” and “it’s crucial to have an active way of thinking” blew me away. I was really impressed with the way their minds were processing t! hese thoughts and also not surprised, as I know all the group is capable despite reluctance to write.

The afternoon’s session was spent creating cut up poems that had been written through automatic writing for five minutes.

The choice was to write about what was going on for them right now and observe where their thoughts lead them, or to use a cut up line from a Jenny Holzer poem entitled “Truisms” to start their thoughts off. There were many interpretations of what I was asking which led to the wide range of variety in the creative work explored.

At the end of the day I was delighted that I had seen some of the student’s potential brought out and could relate so much to the hesitancy to explore through art and writing, but admired those who really tried to let go of their reluctance.

There are particular poems and moments that stand out in my mind from the session and I hope we each got something from the day.