There is a queue of people waiting for food, fifty or so. A man in his 70s with a stoop and a carrier bag, wearing an old-time wind-cheater jacket. A young man in a hoodie which covers his face, he peeps out to talk to his pal. A man with saliva foam round his mouth, often a telltale of mental health medication. Most of the queue are middle-aged men, most wearing outdoor clothes, most have weathered faces.

I'm at The Wellspring, a homeless centre that offers advice, free clothing, medical support, a social space and other facilities including free food. In this last offering, it is the ancestor of the soup kitchens of the 19th and 20th centuries. In fact Peter, who is one of the founders of The Wellspring, had a grandmother who ran a soup kitchen, back in the 1930s. 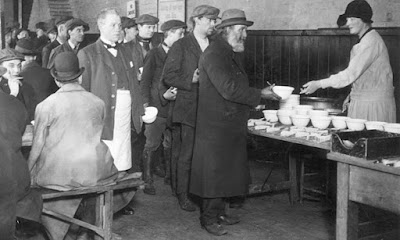 The room fills with the smell of cooking. It is a big bright place, with clean pine beams and lime walls. A line of windows in the high ceiling floods us with light, church-like. I'm writing this while waiting for the queue to subside so that I can eat too. By sheer coincidence, while I'm writing about Peter, he sits down opposite me. I ask him about that first soup kitchen.


"In the 1930s during the recession, my grandfather, Revd. Watson was the vicar of St Elizabeth's in Reddish, a cotton town. Sir Henry Houldsworth, who owned several mills, wanted to give his support to the many unemployed people in the area. As patron of the church, he asked my granny, with the help of the women of the parish, to start a soup kitchen. It proved so popular that people came from all over Lancashire. People were coming from all over and sleeping in doorways. After complaints about the number of vagrants sleeping rough in the area, the police asked her to shut the kitchen down."

I then asked Peter why he started working with homeless people, so many years later.

"I was made redundant when I was younger, married, with two young children. I lost my company car and was in the red. I wanted to become an agent selling capital equipment to industry. The bank manager thought the scheme viable and through the long gestation period, allowed me to run up a considerable overdraft. After thirteen months, I received my first big order. This enabled me to pay off the overdraft and to continue with the business.

"The crux of the matter is that during the crucial 13-month period, kind people would hang a loaf of bread on the door knob. Perhaps a weekend joint. £200 at Christmas time. When I heard in 1991 that the church was trying to start The Wellspring. I thought, this is my chance to pay back the kindness my family received - and I have been involved ever since."

(Phil interviewed Peter Hodskinson at The Wellspring, in Stockport for The Homeless Library project, a history of homelessness which is supported by the Heritage Lottery Fund.)
Posted by Philip Davenport at 09:21