One of the older people to come into The Wellspring during our Tuesday Homeless Library session is Ernie. His memory goes back to the 1940s, a short step from the economic depression of the 1930s and George Orwell's down-and-out pilgrimage. Ernie uses The Wellspring as a place of support and kindness. For him, this is more than a meal ticket, it is also a place where he gets a little refuge from the sharp edges of life. But he well remembers the food queues in North Manchester - what follows is his almost-photographic recollection of the soup kitchen he witnessed as a child:

"I've seen the Salvation Army giving cups of soup outside a hut in a place called Royton. It was 1947, a terrible cold winter. The Salvation Army captain was Jackie Boyes. He organised it for the underprivileged of Royton, where I lived. It was a wooden, rickety-rockety table. Paper cups and plates and an aluminium canister for the soup, they'd ladle it out. Sometimes they'd do fish - the local kids singing, "Don't buy it don't buy it it stinks when they fry it!" - kiddies shouting that and he'd chase them off. He chased me too.

"A childhood memory: a table, a ladle and Mr Boyes to make sure you only had one cupful. Some of the ladies there were in shawls and clogs. I wore clogs meself, with irons. 1947 it were a bad winter the snow drifted to the roofs of the houses. Couldn't get out of your front door some days. It was just after the war, we'd play in the scrapped tanks at Pickfords scrapyard. They'd saw the scrap up for us to sledge with.

"Captain Boyce would come out of the Salvation Army Hall on Saturday at 5 PM and put out the table - on the dot - and you could get some soup. Must have been 20 to 30 people there on the Saturday night. A lot of them had Rickets, bow-legged and walking with a walking stick. A rolling gait, very painful; they'd be only 50 or 60 years old, they aged much quicker then. They had that look that they couldn't believe it, couldn't believe what was happening to them and couldn't believe people were so good. They were honest people, they didn't lock their doors. I never thought they were down-and-outs, they were just like me and you. They would queue orderly, they weren't pushing and shoving. They behaved in those days, in an orderly queue."

A question for another time: what is the price of a free lunch?

(Phil interviewed Ernie at The Wellspring for the project The Homeless Library, which is supported by the Heritage Lottery Fund. For more information about Rickets in the UK today, follow the link above to NHS Choices.) 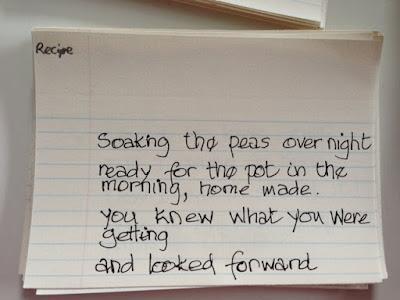 Posted by Philip Davenport at 02:06