Here's a question. Is it possible to get a group of non-musicians together in a room for a couple of hours and get them to write a song? I was asked by Arthur & Martha to come to the Booth Centre in Manchester to help them find out. I'm pleased to report that it certainly is possible!

Although none of our group had direct experience of writing songs they were certainly no strangers to creativity and ideas came thick and fast.  We started by thinking about the theme of our song – that of armour and protection. We did some exercises to help us find words associated with armour and words related to how armour makes us feel – safe, secure, protected.

To give us some inspiration we spent some time listening to and discussing a song called 'I am a rock' which was a hit song for Simon & Garfunkel back in 1965. The character in the song is someone who has been hurt deeply and is now a loner, without friends, hiding behind a self constructed wall.

'I've built walls, a fortress deep and mighty,
That none may penetrate.

I am shielded in my armor, hiding in my room, save within my womb.
I touch no one and no one touches me. 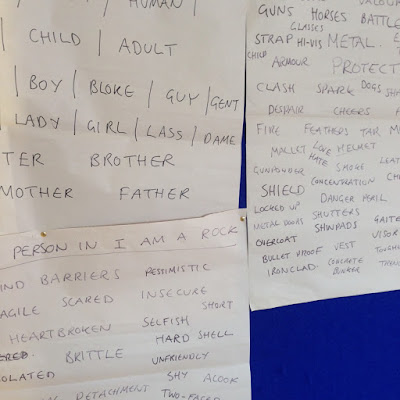 We wondered what might have happened to this person to make him that way? We thought the most likely cause would be a family or relationship breakdown. Those kinds of problems are a known factor in causing homelessness and we found other parallels to the issues homeless people face.

The discussion touched on the extreme vulnerability of sleeping rough, when a sleeping bag is your only armour. We talked about how drugs and alcohol can create an emotional fortress giving a (false) sense of protection. Above all we felt a sense of strong sadness that the person in 'I am a rock' was cutting themselves off from possible support and help. We decided our song would have some elements of positivity about love, faith and support.

‘The whole thing  (‘I am a rock’) is about me. But I am coming out of it. I want to face the music, not run away- to give up on love is to give up on life.’ Karlton

When we came to write our song we zoomed in on the word 'barrier'. A barrier can be something that is put in place to keep people out. But it can also be put in place to offer us protection and keep us safe. We liked that it had two different sides to it. We discussed the implications of this – positive and negative – on people who put up barriers to others.

An effective technique in songwriting is alliteration where several words beginning with the same letter are strung together. We decided to adopt this and went for 'Behind brittle barriers' as our title. We included the word 'brittle' to reflect that emotional barriers can be broken down, given the right amount of love and support.

After some thrashing out of melody and chords (we definitely wanted the song's music to sound upbeat) we arrived at a finished version just as our 2 hour deadline approached. We then ran downstairs to do a very quick and impromptu performance! (video link)
As a songwriter I've never worked on a song that was finished so quickly or one that was so truly collaborative. Each person in the group contributed something useful and different and the song reflects that with a broad range of ideas. Above all what I get from the song is a sense of hope – that everyone – brothers, sisters, fathers, mothers – are hiding behind barriers of some kind, but that they are brittle and with hope and faith in each other we can find the support we need.