You never know when an idea will take flight and ascend beyond the original thought, carried by other people. Our workshop on 20th July was just such a moment. The Armour project is about self-protection and the many ways we find safety, physical or mental. The project has been running with this idea for awhile at The Booth Centre, working with homeless people, several of whom are army veterans. Today, instead of putting on layers of self-protection, we asked people to imagine what might happen if they were removed.

I was concerned we'd be asking people too much to take away their protective layers, which are so necessary for survival on the street. But calculated risk-taking is part of what we do, as any artist. I read a little of Sir Galahad by Tennyson, the moment the warrior realises if he is to let in love, he must remove his armour. It was all that was necessary. Soon the tight little band around our table were writing about vulnerability as if it was a taste of freedom. I guess they're tough enough to put their armour back on whenever they wish; but they recognise the relief of being able to let it go. 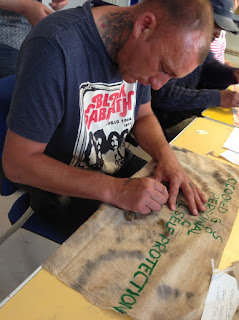 The resulting pieces, written as tanka (an old Japanese form of love poetry) were scribed or sewn onto pieces of cloth, to be included as parts in the cloth suits of armour we are constructing. You might say these pieces are idea-armour.

Although the tone of this session was serious, and there were many moments when the group skidded close to tears, it was shot through with humour and a sense of togetherness which softened the hard edges. I particularly enjoyed Phil B's 'grumpy old guy' piece, which starts off with the excellent line "Bog off and get knotted", a sentiment I share, especially first thing in the morning.

The day was given great intensity by Lee who worked with us for the first time, leaping into it all with the urgency of someone facing their devils. It was also hugely supported by Melanie Miller, a stalwart helper of our projects who quietly and gently aided people along the way.

Philip Davenport
Posted by arthur+martha at 07:28