I was back with the Handicraft group today at the New Mills & District Volunteer Centre. Members of the group knitted rectangles evoking the local fields and heather to add to the wool quilt. When embroidered together with the felted jumper and tweeds, they add real depth of colour and texture. 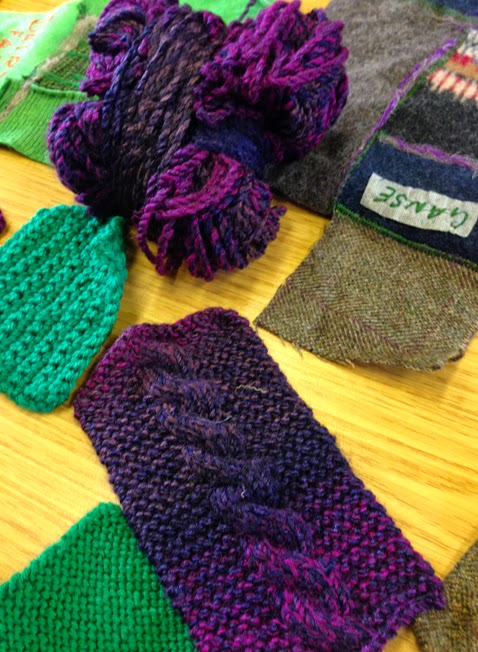 As part of Stitching the Wars, I am collecting reminiscence from older people living in Derbyshire, examining how the 2 World Wars effected the land and the people living on it. As ever with reminiscence, conversation takes its own route and some stories just need sharing. Doreen's are a case in point.

‘The Sunshine Kiddies’ run by Dora and Mrs Wardle in Hayfield- I was in them. We used to do concerts in the Sunday School and at St Johns. Used to walk in the May Queens parade, then it was out to Little Hayfield, then to the Zion in Birch Vale, then back to the school field. Used to dance on the platform in the May Queen Field, aged about 14.

We did tap dancing, ballet, little concerts and pantomimes, things like that. Once we gave a concert at the American Camp at Burton Wood, that’s the first time I tasted bubble gum! They all cheered when we finished our concert, and took us into the mess hall, spread out with food. What struck us being rationed, was the spread they put on for us. There was about 30 of us, all sorts on that table, ham, big cakes, we hadn’t had those for years.

You couldn’t have a cake at home, what little margarine you had, you’d put on your bread. When we saw a joint of meat on the table it was just like Father Christmas had visited.

My brother Harry was a messenger boy, had a bike. The headquarters of the Home Guard was in the George Hotel at the back. One officer had come to visit, they had one gun between them, they had what they had- they all lined up and he said ‘attention’ and he banged the gun on the floor and it went off, banged a great big hole in the roof!

My brother told me, there was a mock battle, people from Chapel were supposed to raid the village, all the Home Guard were hid under the bridge in Hayfield, of course they found them and we were captured!

There were bombs up Kinder Road, killed some people, a girl from school. We all took a bit of money to help. My mother was in the SJAB (Saint Johns, Army Ambulance) she ran up to see if she could help when that bomb went off.

The air raid sirens, there was one of those windy up ones at the Police Station opposite Hallam’s, Constable Hill his name, we called him Bobby Hill. He caught me one swinging on a lamppost, clouted me!

As a young women, Doreen joined the St Mathews Players, the photo above shows her (pictured to the far right, white blouse and glasses) during a performance of St Trinian's.
Posted by arthur+martha at 05:51