Last week I was lucky enough to meet with Mr & Mrs Lawton, for the project stitching the wars. Mary Lawton was a Land Girl, who shared with me her love of the animals and the fearful excitement of the bombing raids.  Notes from our conversation follow below. 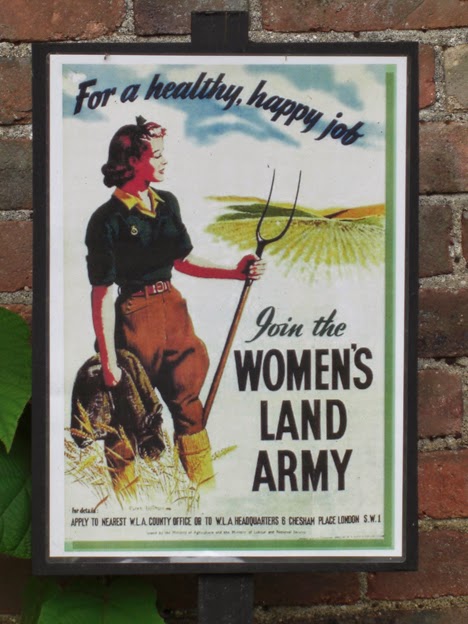 I lived not so far from the Thames in Kent. The German bombers would follow the Thames and drop bombs in London. When they couldn’t get through the Barrage Balloons they’d drop the bombs around us. It gave me asthma, my doctor said ‘you’ve got to get out of it’ he said it was ‘nervous asthma’  I don’t think I would have passed for the ATS because of my chest, so I joined the Land Army.

Went to hand milking and dairy work at 18, the cattle didn’t upset my chest. It was hand milking in those days, thought it was better than machine milking, much better for the cows (wouldn’t say that sort of thing today, more modern machinery) they came into contact with you and got to know your voice. Went to East Sussex School of Agriculture in Lewis in 1944.

My mother never said anything, I don’t think my father liked it, but you had to do something, and it was better than the munitions.

I’ve seen Messerschmitt’s and Spitfire’s dog-fight in the air, and V1s and V2s near Graves End. Didn’t mind the V1s so much, you could hear them, the V2s you couldn’t hear till they exploded, they were really scary.  I was with my best friend Eva on the same farm, it was a three mile cycle ride home, you could hear the V1s, we jumped into the ditch and put our bikes on top of us- don’t know what help the bikes would have been!

I’ll tell you something I have never seen in a book: we were between North Fleet and Gravesend, stood outside the fire station. We were all watching this dog fight, one of those German planes made a great big swastika in smoke, one of our spitfires flew up and shot it down. We were there.

When you’re young there is a streak of excitement in it.

My first job was in Hever, How Green Farm near the Astor’s Hever Castle. Mr Birchall whose farm it was, didn’t do so much fo the work himself, got other people do to it for him. The Astor’s were so nice. Never talked down to you.

There were a lot of German and Italian Prisoners of War working on the farm, like Kurt. They were hard workers. Most could speak a bit of English, we didn’t say much but ‘it’s a nice day, or ‘how are you?’. They were well fed- better than in their own army.

You didn’t have a lot of free time. Had to clean the cow sheds, you’d put your arms round their necks to put a chain on, they got used to you. When the machine milking came in, they didn’t get used to you. I would milk about 8, they had 6 Landgirls, that was the first farm. It took less than 10 minutes to milk a cow, the quicker you milk the cow the more milk you got. I got very fond of cows, we had an understanding, they liked being talked to, we got to know each other. 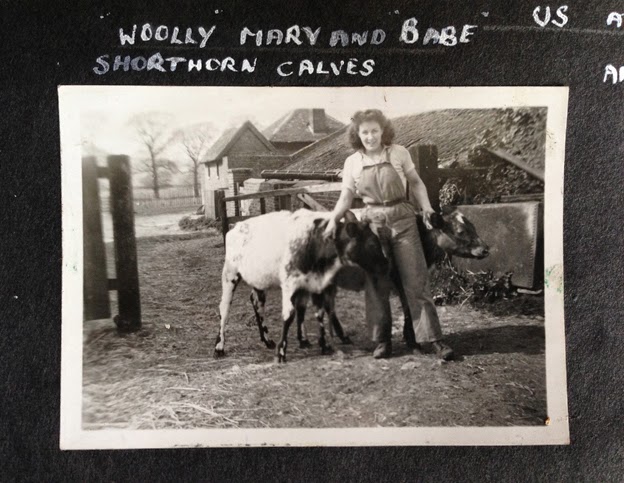 I was a good milker and got a job as a relief milker. Would cycle to a few farms. It was nice but very tiring. Early in the morning, all double summer time- (put it on two hours during the war) so you wouldn’t have many hours sleep if you were haymaking and getting up at 5 for milking.

When Mr Birchall brought the farm in Derbyshire in 1949, he asked me to come up to. The farm, off the Mellor Road, just above the Pack Horse in Rowath, How Green Farm, he named it after his farm in Kent, changed the name from Brier Grove Slack, not that anyone would remember that name anymore.