We've been working in partnership with Gallery Oldham to devise new ways of working with memory boxes to stimulate reminiscence. On Wednesday we revisited our reminiscence around the topic of the Royals, royal commemorative crockery, biscuit tins and souvenirs. The theme is a rich one because it highlights such big gaps in the social fabric, between rich and poor, past and present, Empire and UK. 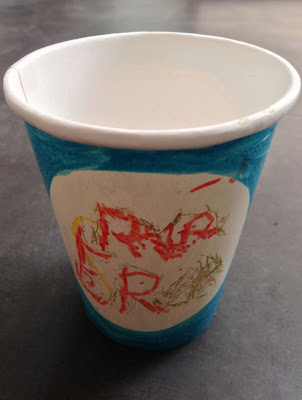 Many of the folk we work with remember the inter-war period vividly and the royals were celebrities of the day. Several of the women in our group had been taught how to curtsey and most people witnessed the Queen's visit to Oldham. There was the usual mix of grumpiness and acceptance about the royals. Unusually, one person had been to the Palace to receive an award (he was tight-lipped about what it was) and could describe a Buck Palace tea – very good Battenburg cake apparently. His description of the Queen: 'She is very gracious, but extremely small.' 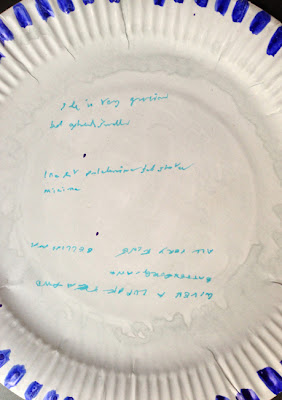 The point of this session was to go with people's reminiscence and then stand the whole thing on its head and invite people to depict themselves as a King or Queen, drawing either a likeness or a symbol of themselves onto a paper cup.

1 Prepare a paper cup by painting the background patterns. You'll need a colour that brings to mind royal crockery – blue was the colour we opted for. Paint a simple background, leaving an oval space for a portrait and perhaps some extra spaces for dates, a motto and some patterning.

2. Invite participants to make a portrait of themselves as a king or queen. This might take the form of a traditional portrait, or might be a symbolic crown, or an initial followed by the Regina R (for instance, Mildred would be MR) or even some abstract marks.

3. Ask them to add a date, perhaps their date of birth.

4. Ask them to add some words in the space left for the motto. Perhaps it could be a family saying, an idea of what they'd do if they were monarch, a memory of a time when they felt like king/queen, or most importantly of all describe the cake of their dreams. 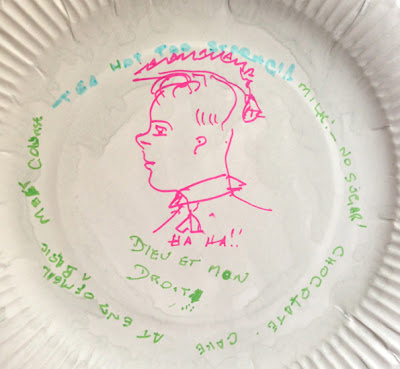 Reminiscence about Royal events. Views on Royalty. Personal reflections on a time when they felt like a VIP.