Objects of our affection

Objects of our affection project
Warrington Museum, 28 May 2013 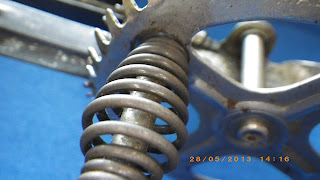 I come from energy

from
a fat and bubbly lady with pork pie hands
and starched apron
I come from the hustle and bustle
of a fast furious room
with laughter and smells and tastes and
lightweight and clanky
I come from worn, bleached hands
nails crammed with suet and sugar
and flour and eggs, she is
menacing and bossy but
fights for cleanliness.

(Photograph of pudding mixer detail, and poem, by Christine)

We're working with a group of carers to re-label objects at Warrington Museum, creating new viewpoints and stories items we've encountered in the museum displays and the stores. Not only is this a chance to creatively re-think some of the museum collection, it is also a much-needed respite for the carers from their demanding roles.

Being a carer, you think about others all the time and it becomes a habit. You forget that you have needs too. You're just tucked up in your day-to-day. Now I've started putting on a different head for writing and art. It's my Worzel Gummidge head, it's a luxury to have it for two hours. Then when we're done, it goes back in the box.

The sessions allow people to revisit their shared past and to think about what it means and how it has informed who they are. Dave was brought back to his childhood in the last war by catching sight of a gas mask case:

I'm thinking of things now that were in the back of my head, lost. They're coming forward again, making themselves known. I was talking to my wife about the last session and she'd shared some of the same experiences, growing up during the war. She remembered the gas masks too.

It's opened me to new things doing this, you're making me think outside my usual. I'm doing things that I wouldn't have thought of. It's what I wanted, to get away from the everyday and put in something fresh. A little challenge is a nice thing to have.


What has struck me has been the affection and emotionality that these objects uncover, wrapped in all their histories and associations. It's a kind of spell-casting to hold them and project oneself into their lives. We worked fast, everyone producing several pieces of writing. I've put a couple below, very lightly edited:


the smell depended on what

a box of photographs

memories from the past

letters from loved ones

never to be repeated

a jumble of colours

stuck to it - crystals

connections with the universe

cough cures, pills for all and

one eye remains 55 years on

in an old pillowcase

all the basics, brushes, buckets

things made by my children:

cards sent with love, a

of a tiny hand

a note to mum on the back

of a cigarette packet.

Finally, Derek writes about that curious sensation of breathing the air in a museum, the dust of the past - and how the sounds of now seem also to be sounds of then:


aircon and parents and children talking busy atmosphere not noisy cars going past on the other side smell a woody musky atmosphere temperature ambient people talking as if they are interested in something learned people and schoolchildren teachers came into this museum a long passed project at school maybe objects appear to be lonely but others bring a memory of good times in a lively room in a country mansion a home with no TV or radio where people make music, laughter.

Posted by Philip Davenport at 13:55