Whatever happens, it's worth a little laugh

In this interview, the extraordinary Fred describes his experience of dementia. His language has been affected by the disease, but he uses this 'changed' language to very eloquently describe life from within the condition. Dignity and acceptance rings through the following short discussion, humour too. Fred has a very sparkly demeanor, with which he counters considerable sadness and difficulty. 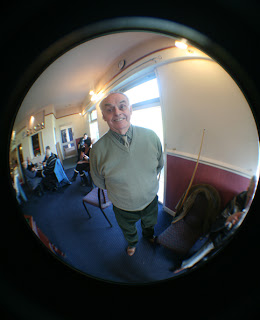 “Whatever happens, it's worth a little laugh.

“This condition, it can be different degrees, depending on the pressure of the people in the surround. It falls on me. I didn't HAVE a fall – it falls ON me. I try to give my best and give a little strength so they are not disappointed. When I'm at home sometimes I find it difficult and there doesn't seem to be any answer. Later in the day, my brain sees something. A friend calls or something brightens me up. Sometimes bright as a button and strangers can't tell I'm in that condition.

“Doctors listen in varying levels. But they don't hold in a regular style as I call it, so I leave them with no information. Mostly they're good.

“Early childhood I remember a little. Could have been four or five. Better when 15 or 16, that's what I think I remember best. But whose memory's failing?

“Woodwork teacher 34 years. I still meet young men who say: 'Aren't you Fred? Oooh, that thing you made me make in class, it worked a treat.'

“I got married. A good idea, marvellous. Margaret!

“This condition, it went worse over a 20 year period. I lost me, it edged away. But Margaret was brilliant, clever. I was only the teacher.

“The condition: it would be a wobbly line. Differences at different times – there's no such thing as beginnings and endings.”