It's all unknowns, I've never experienced any of this before. It's my first time experiencing dementia. Is this what to expect? Is this normal for Lewy Body dementia?


My son's GP didn't know, they hadn't even heard of Lewy Bodys Disease.


You can't see people have dementia - it's not tattooed across his forehead, I know, we know, but they don't. Into the unknown. When Ray was first diagnosed I didn't know about the disease, never even heard of it.


There's something different everyday. Yesterday he developed a kind of phobia, he was stood behind me all the time, following me around. Other times he blanks me, won't answer me. The illness changes the behavior and the personality - it's difficult to know how much is the illness and how much is it just the person being awkward.  Like in the song, "You always hurt the one you love..." It's always me, not my children. I can weep buckets for nothing, something said and that's it. If I feel I'm going to cry, I go upstairs and cry on my own. If I cry in front of Ray, he ignores it, walks away. Then he comes back and says 'Do we want a cup of tea?' He knows its him who's upset me. 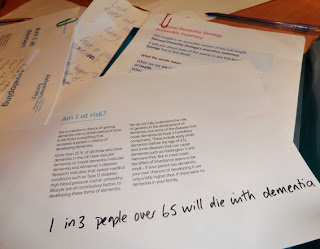 It's not like him, not like he used to be. Now he ignores a lot of things. He doesn't know how to apologize anymore, he's completely different as far as I'm concerned, not to other people - just to me.


At the beginning I knew there was something wrong, but it took a while to get a diagnosis.

'and a bucket of water for the horse too'... its so embarrassing when he says it and people don't understand it.  At the beginning I knew he wasn't right he was doing things differently - not eating properly, wasn't using his knife and fork, was picking things up like his Sunday lunch- picking up his Yorkshire pudding with his fingers and showing a bit of aggression when we asked why.  We talked him into going to the doctor, little changes not acting normally. If you said don't do that, he'd do it more just to annoy you. That's how it started. The doctor said we'll examine you, get a scan, see what's happening.


They thought at first it was just Parkinson's, they assessed him on his own. Told me to take another member of the family with me so we could pick it all up. Got to see Dr M, that's when she said that your brain is in sections, and there's one section leaking into another and it shouldn't. She explained all this and he should stop driving and all this. He didn't want to, been driving all his life. His insurance wouldn't cover it. It took 8 months before he got rid of the car. I wouldn't let him take the grandchildren with him, I'd go in though, be frightened sometimes.


I can't praise Age Concern enough. They come to your house, help you with everything. And go on a carers course, we laugh together and cry together. We go to the meetings once a month. When I first went to a carer's course, everything felt lifted. It's all the unknowns; you go to the carers and everyone bares their souls. It's like what you see on telly with the Alcohol Anonymous - what's said in that room stays there. It's really uplifting, I can't praise it enough. Opens your eyes to what's in front of you. To talk openly about it all. My children say 'But he's ill.' I know he's ill, but it doesn't stop any of it. What advice would I give? Join one of the groups right away- that prepares you for all the stages that's ahead of you. You've got to go, that's where you get your help and info from.


For more information about Lewy Body Dementia you can view
http://alzheimers.org.uk
Posted by arthur+martha at 12:38