On the 2nd of September as part of our project in Four Acre, Phil and I took to the streets, to make an installation on the windows and doors of the disused Woolworth Store right in the heart of the shopping area on Church Square, St Helens. 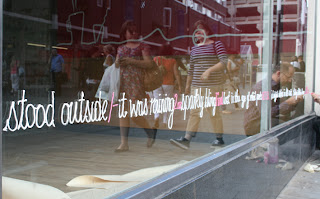 pic’n’mix transformed for a couple of days the sadly neglected face of Woolies into a joyful, witty, poignant work of self-expression, straight from the community which this store once served. The poem lasted as long as the rain held of, and sticky fingers resisted.
This piece was jointly composed by the Chester Lane Library art/reminiscence group in commemoration of Woolworths. This poem was one of the outputs of community art/poetry workshops commissioned by St Helens Council and delivered by arthur+martha in 2011. 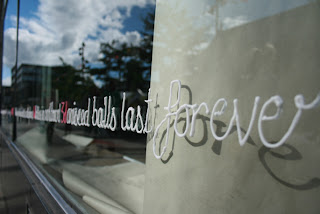 pic’n’mix was written in icing sugar, in reference to Woolies sweet counter and had a hugely welcoming and enthusiastic response from the public. Some comments from passers-by were incorporated into the piece. 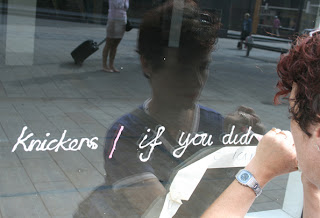 The poem is one single line that stretches along the bottom of the entire shop front, so that the reader has a sense of walking through the piece, into an earlier era that exists now only in memory. It is a work of collective reminiscence, verbatim from the Chester Lane group – it is literally the voice of the community, celebrating their past and also subtly reflecting on the transience of all things.
The work layers together the everyday poetry of conversation and the act of memory: childhood nostalgia, oral history, humour, anger, celebration, commemoration. A coming together of many individuals. The poem marks a shared past, not only of people in St Helens, but of working people across a whole century in all their tragedies and triumphs. 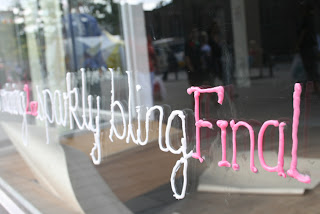