On Tuesday, Phil and I went down to Leicester to set up a new exhibition showcasing our recent project with Young Offenders... 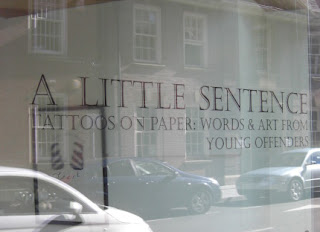 An exhibition of tattoos designed by young offenders to explore and explain their lives opens at Pedestrian Gallery in Leicester, UK on 14th September to the 2nd October 2011. Private view Thursday 22nd September 5.30 to 7.30.

In summer 2011, young offenders in HMYOI Glen Parva used the stylings of tattoos to design images and poetic statements. Tattoos contain some of the most powerful statements that people make - layering words, image and identity.
Through a combination of writing and art workshops, participants pinned their feelings down on paper, to be seen and appreciated by the wider community in Leicester. They pay tribute to the people they care about most, describing their dreams and some nightmares too. They are touching, funny, ambiguous and surpisingly vulnerable. 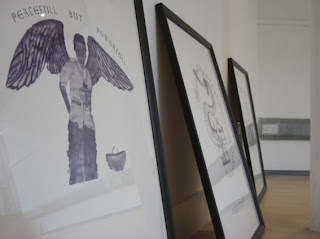 The project was a partnership between arthur+martha CIC, Rideout and the Education Department of Milton Keynes College.  arthur+martha work with people whose voices might not be heard – homeless people, school pupils in danger of exclusion, older people in healthcare, holocaust survivors and others. Rideout, the commissioners of this project, have facilitated creative work in prisons for over a decade. 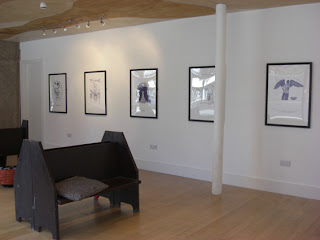 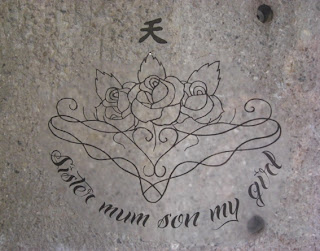 A Little Sentence is part of The Truth About, Rideout's programme of work in which professional artists are commissioned to develop new artworks that arise from spending time working with prisoners. The Truth About has been funded with support from the European Union (DG Justice), Simplyhealth, and Arts Council England. Rideout (Creative Arts for Rehabilitation) is a registered charity that specialises in arts projects in the fields of crime, justice, punishment and the prison estate. 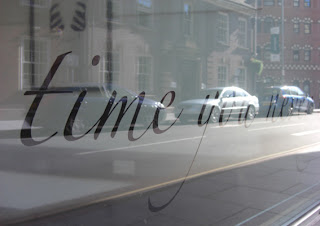 "GROW ROSES or you are wasting time & time you never get back." (Participant, HMYOI Glen Parva 2011)
Posted by arthur+martha at 05:31