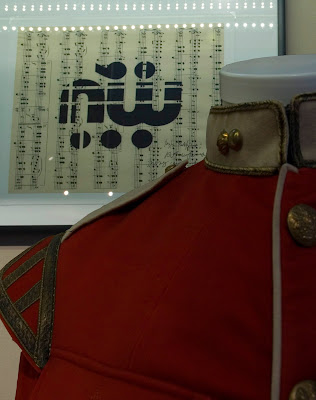 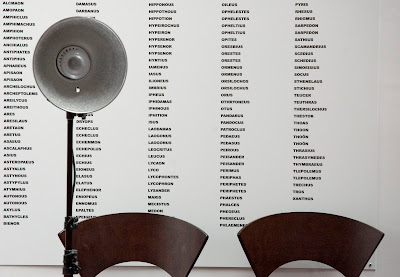 Visual poems by Satu Kaikkonen and Steve Giasson at the Fusilier Museum, Bury.

The Text Festival in Bury has been an extraordinary gathering of international poets and artists, redrawing the map of language. Exhibitions from the festival extend out from the art gallery to the Fusilier Museum and the Transport Museum. Philip, who curated the Transport Museum show, also helped place works selected by Tony Trehy in the Fusilier Museum. Here are his explanatory notes on some of the pieces in the show:

Language is one of the barriers between people that cause conflict. Beaulieu's poems are often abstract constructions of letters with no obvious linguistic meaning. So, this is an international declaration of peace. 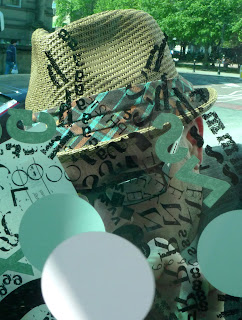 All of these pieces describe machines of destruction. Widener is an 'outsider' artist who depicted plane and shipping disasters. He was often short of money, working on cheap paper napkins instead of art paper. Ian Hamilton Finlay used images of military equipment to describe the violence of nature and nature to describe human violence. Christian Bok's 'language virus' is of course a kind of killer, as is the sniper at the end of the wall.

Irene Barberis's line of black words is taken from the Book of Revelation in the Bible. Here, the words echo the shape of a machine-gun belt; bullets for the gun sitting over them.

In these two cabinets, the work of the Finnish visual poet Satu Kaikkonen provides an unplayable musical score for the silent instruments (see photo above). Kaikkonen, one of the leading experimental poets in Finland, is also a music teacher. Hidden at the base of one of the cabinets is a postcard from the sequence 'a map of you', made by homeless and vulnerably housed people in Bury and Manchester - more of these postcards can be seen at Bury Transport Museum. The single word message of the card can be read in many ways - perhaps here it refers to the solace brought by music.

This visual poem (or 'vispo') by South American Fatima Quieros is a variation on the letter X. Here it rests on the empty sleeping bag like a question - who was the ex-occupant of this bag?

Canadian poet Steve Giasson has listed the names of all the dead in Homer's Iliad, the heroes and the unsung (see photo above). The piece speaks to the other roll calls of the dead in this room - the many Fusiliers who gave their lives in two world wars.

Butler's triptych subtly points up the physical brutality of war. Davenport's spreadsheet is based on his notes taken at war crime hearings in the Hague. The trial concerned the massacre of Muslim men and boys in Bosnia. The poem counts up the dead, using a spreadsheet like a kind of mourning abacus. (Philip's account of writing the poem at a war crime trial in The Hague is to be found on this blog, titled "I am sitting in a room" written March 2009.) 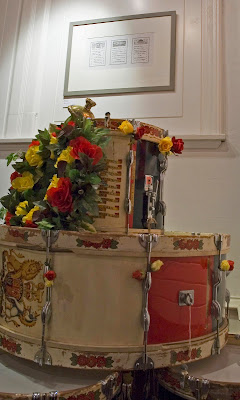 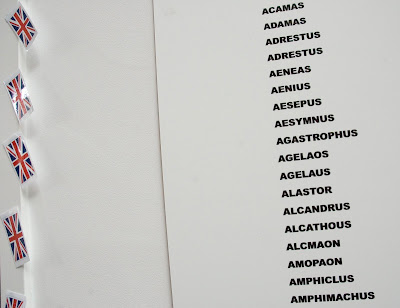 The Text Festival continues until 9 July 2011; please contact 0161 253 5878 for dates and opening times of specific exhibitions or events.
Posted by Philip Davenport at 06:29

thank you for sharing & writing on the text festival, wish i could visit
if you're interested in visual poetry, i invite you to take a look at RENEGADE -

an on-line journal i edit
have a wonderful day!