We are all space

The exhibition a map of you at Bury Transport Museum will continue until 19th June. As well as featuring the work of iconic visual poets like Bob Cobbing and Robert Grenier, the show also contains works by homeless people from Manchester and Bury, in the form of customised postcards. These were made as part of an ongoing arthur+martha project. Below is the text from the exhibition handout, together with some photos of the works displayed. 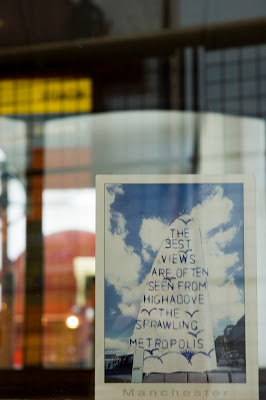 The best views... (Anonymous) from the a map of you project

Where are you heading? What space do you carry in your head, what kind of map? In this exhibition, works by visual poets and text artists are placed in the Transport Museum forming a conversation with the permanent exhibits. The exhibition is part of Bury Text Festival, which brings together poets and artists from all over the world to draw new maps for language.

Main Hall
// Still, Marton Koppany and Go, Fatima Queiros = the contradictory tug of travel. // a map of you, various. These postcards in bus windows carry tiny handwritten stories, snatches of homeless people's lives in Manchester and Bury. In the white space between buildings, stories appear, some self-explanatory, some funny, troubled, elusive. 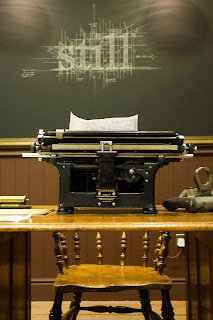 The Manager’s Office
// ETCETERA (1970) / A ROUND DANCE (1976) Bob Cobbing. Cobbing’s spirit is felt throughout the Text Festival – his poetry delights in nonsense, but also travels far into abstraction. He has mapped some of the wildest reaches of the English language, often using office equipment like photocopiers and typewriters. Poets Claire, bp Nichol, Davenport and hundreds of others were published by Bob’s press Writers Forum. // Coverpiece (2005) Jennifer Pike-Cobbing. An extraordinary mixer of the verbal and visual, Jennifer also had a profound creative influence on her late husband Bob Cobbing. // Codesigns (1976) Paula Claire. Punning the ‘lines’ of wood grain with the lines of a poem. // Lament (1969) bp Nichol mourns a passing. // Space = the soldier who died for perspective, Tony Trehy. Using strips of poetic text like measuring tape, Trehy calculates human loss. // STILL (2011) Liz Collini = astonishingly elaborate construction drawings of words, Collini's work is often transitory, like this chalked piece. // Blueprints, Andrew Topel = half-visible in the office drawer, halfway between diagram and stanza. // Spoken Landscape A, Basinski = inserted in typewriter. // Typewriter Poems, Geof Huth = giveaways. 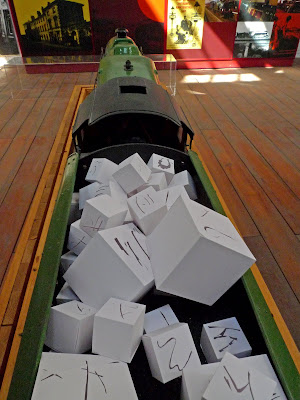 Right Platform
// Visual Poem Boxes, Matt Dalby = escape attempts, fleeing the boxing of language and logic. // THE SECRET Marton Koppany's large perspex piece in the goods wagon holds the viewer’s reflection in brackets, like a typographic trap. // APPEAL IN AIR, Philip Davenport = a poem held within a spreadsheet, mourning the human rush. // Stephen Butler’s three arches lead into an elegant maze of misunderstandings and gobbledegook. // Newtonian, Zeynep Cansu Baseren = a mini-me of the architecture around it, shrunk to the scale of a model train. // Concrete, Andre Topol = reference and deference to the original 60s concrete poets. // Also/postal, Reed Altemus = a salute to postmarks and the sadness of suitcases.

Left Platform
// Poems, Robert Grenier = haiku-ish meditations on the momentary. This sequence was written in and about Ramsbottom, near Bury. Bob is one of the seminal figures of American L=A=N=G=U=A=G=E poetry. // Leftovers, Louise Woodcock = word fragments left from a performance in which Louise ate books. 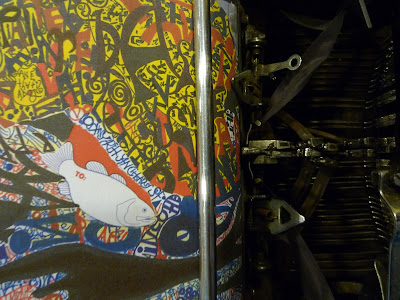 Spoken Landscape A, Basinski
Posted by Philip Davenport at 11:23