a map of meself 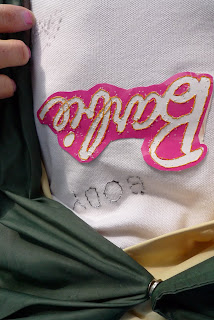 As part of 'a map of you' our art/poetry project with homeless people, we've invited guest artists to run some sessions, or edit work. This has been made possible with the help of Bury Text Festival, whose support has been tremendous. The Festival brought poet Geof Huth over from the USA and Geof spent some time working for 'a map of you.' Below is an extract from his blog describing the session. We worked with four vendors: Chris, Scotch John, Tim and Mircea. Each encounter brought moments of tenderness anger, sweetness. Tim introduced us to his dog Charlie, Mircea displayed his method of learning English - by embroidering the words onto himself. Daniel Cenna from BBC Radio Manchester recorded the session and the broadcast feature can be downloaded from our website. Over to Geof, as they say. 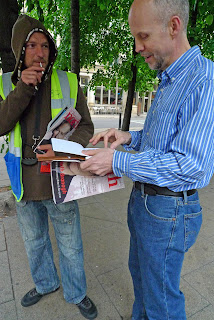 Today was too big a day for me to recount everything that happened in any detail at all. This will be just the roughest of notes on today's events, those of the day before the official opening of the Text Festival, a celebration of the text as art, in Bury, England. All of today's events, however, occur in nearby Manchester.

I started the day with a big breakfast, a huge British breakfast with lox and sausage and eggs and fruit and toast and tea. Then I took a cab to the Manchester offices of magazine The Big Issue on Swan Street, and my day began.

The start of the day was quite remarkable. I met up with the poet Phil Davenport, Gemma from The Big Issue, and Daniel from the local station of the BBC, and we visited four homeless men who make their living by buying copies of The Big Issue for £1 and selling each for £2, thus making a 100% profit. These men we met make their living that way, and exist in various states of homelessness, some having made it into flats they share with others.

When I started the day, I wondered if we were, somehow, taking advantage of these gentleman, by talking to them about their lives in order to learn about them and to find two or three phrases that actually map their lives, document them. This proved reasonably easy, because everyone makes poetic statements. It's just that we don't usually attune our ears to them, and Phil and I tried to do this today, and Phil especially succeeded. In the end, we had some beautiful statements from these four gentlemen, and I learned that we had given these men something. We'd given them the opportunity to tell their stories, and a way to document them. Ours was a human exchange of interest and attention. Even on a coldish morning in Manchester, the living human heart beats warm...

Geof also documented the experience as a poem.

A Map of Meself

teeth that tell of you
(through the gap)

of the stigma
of the mark

hating the interiors of

just a white note
in the movement

just a white note
in the speaking

just a white note
lost in the chorus

it’s okay putting it in words

from the Helms
not at the [singular]

man of faith
but not religion

season of sunshine upon it
and green for it

rain comes down upon
then again sun

rain comes down upon again
then again sun again

it pissed down twice

is slipped between the lips
as words slip out between

decades on the street
and “it’s not bad”

with a grave gentle dog
“Charlie” (a she)

old though they be

“I’ve got my travelling boots off”

Mancunian now and for good

“I’ve got my travelling boots off”

“It’s harder to sell on sunny days”
he says

“But more hassle on a bad day”

come bearing paper flags
on the day of a wedding

patriot from Romania
and still learning this English
into him

an engineer by training
and learning to draw with his hands

pink fingernail polish flaking from fingers
erosion from the edges

on these sturdy hands

mind wandering into conversation
or through

the intensity of compulsion

he says
“I decorate my life”

changing as it doesn’t change.
Posted by Philip Davenport at 10:39