Starting anew is always a push and this is very new territory for us, our first project with homeless and vulnerably housed people. We're asking the folk we work with to make work about Manchester as they encounter it and to inscribe postcards with their experiences and visions. We're constructing a kind of tourist Manchester, but seen from the point-of-view of homeless people. 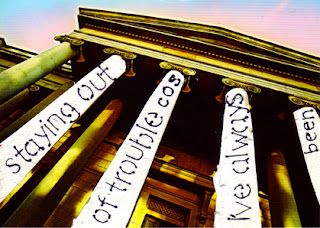 9.30am sitting at a little metal table with vendors E and K in the Big Issue foyer. Vendors come in here from 8am onwards, picking up copies of the magazine to sell and then hurrying off to their pitches to catch the rush-hour customers. There's a breakfast club, tea from an urn and toast served by the goodhearted D, a godsend if you've been freezing on the streets of Manchester rough sleeping. Most people need to sell so the respite from cold and wet is brief, then they're on the street again.

I have a memory flash of the scout camps of childhood, the smell of outdoors on damp clothes, the chill and the welcome burn of tea in my throat. But here faces are scoured of colour, many are scooped to an astonishing thinness. Clothes are over-big and worn like a shell, a dwelling.


E and K talk to us with great openness. They describe years spent in hostels, the vertigo that comes when you fall through the gaps in the safety net, the struggle to swim back up to the surface, to be part of society not apart. The difficulty of finding peace, privacy and the great impossible longing for home, whatever form it might take. As we talked, Lois and I made notes and the notes were transcribed by the participants, or ourselves onto the postcards.

The method used for the cards was devised by the artist Anneke Kuipers, who worked with us on our book PATIENCE. A tourist postcard has the main feature of the view cut out of the picture on its front and stuck to the back. Text is written into the white space on the front and around the displaced image on the back. The pieces were quick to make on this cold morning (Lois had prepped them earlier) and intriguing enough to hook people's interest. 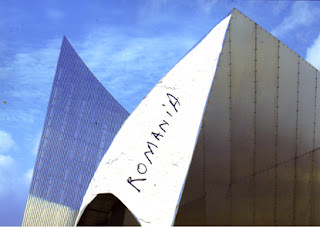 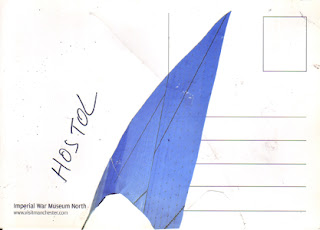 The conversations flowered quickly and then were gone, but our little stack of poem/postcards grew at a healthy rate. A vendor jotted a memorium for a friend who'd just died. We had a struggled conversation with Roma vendors that ended in laughter and two Roma words for me – vacance (holiday) and hostol (you can perhaps guess that one). Working alongside us was Gemma, a Sociology student working as a volunteer at The Big Issue, with a big line in friendliness and kindness and hot tea.

The afternoon session at The Booth Centre was a longer, structured workshop and became an exploration of both the familiar an the strange. We discussed Manchester and the layers of memory living in it for all of us. As the group talked, revisiting these familiar places , a togetherness was conjured up. But it was punctured with little shafts of scare. At the centre of the discussion was R who has lived his (long) life in this city and sleeps rough here. He knows the tunnels, the crypts, the air-raid shelters, the forgotten places, the quiet. We made a group recollection of the city and then more postcards, these funnier and harsher, as the group gained confidence. Then some one-to-one individual pieces, exploring vulnerabilities. And suddenly the end was upon us, as they say. 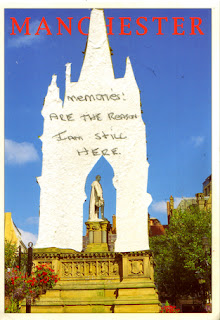 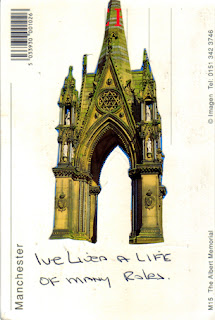 'I'm exhausted,' said D. 'And I've not moved from this seat.' There was a round of applause for the work and the spell was over. 'Back to out there,' said D. 'It's scary y'know.'

a map of you is supported by Arts Council England and Bury MBC, and has The Big Issue, The Text Festival and The Booth Centre as partners.
Posted by Philip Davenport at 11:20

Email ThisBlogThis!Share to TwitterShare to FacebookShare to Pinterest
Labels: a map of you, artist in residence, Bury, homeless, Manchester community arts projects, The Big Issue, The Booth Centre