This was a breakthrough day for the project, on our third week; suddenly the writing came alive and found a place among the portraits and collages and all the visual richness that Lois has helped to conjure. Anger was the key that unlocked the words, as it often is.

I'd just had a long conversation with Roz, one of the organisers of the young carers' group. She took time out from her usual busy-ness to talk me through her thoughts about the group and caring generally. One of the hidden aspects of care, she explained is anger. It gets buried, but it's there. Many young people who are carers lose their childhood and that is a high cost, seeding great resentment. 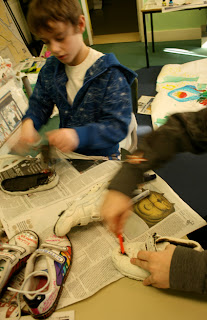 Immediately after this conversation, Lois called me over to the trainer customisation table, where a little experiment with destruction was taking place. The kids were wrecking training shoes, gleefully and very efficiently. Scissors, scalpels and good old fashioned ripping were all taking place, sometimes simultaneously.
"We were just talking about anger," I said, "how convenient."
"So what makes you angry?" Lois asked the group. 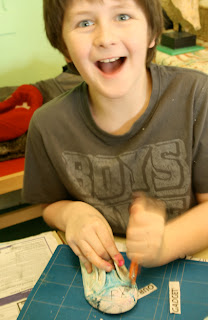 And out it came, the sofas that they hit in frustration, the walls, the screaming into pillows, the whole aaaaaaaaaaaaaah. One girl painted her 'anger pictures' - big crazy paving patterns filled with burning colour. Another ripped paper to pieces. Another drew pictures of herself over and over and scribbled them out.

In every single case they described, they went into another room to show their fury.

One girl explained how her Christmas present had been broken by her sibling ('He's ill. Got something wrong with him. I have to look after him.') and when she got cross about it she was reprimanded for showing anger to the invalid. All the outrage of a child's sense of injustice was in her face, real and powerful.

I made some notes as they spoke. Perhaps these pieces will feed into next week's session, a spur for our portraits into somewhere new. But however it moves, we have gone deeper, we have broken the surface. 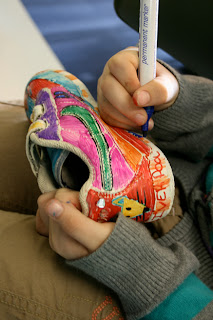 Posted by Philip Davenport at 03:55