Rolex and the People’s Liberation


Today is greyest in CQ since my records began. The view from my apartment window is ghosted with the rainy fog (wu) which becomes beautiful in the early evening neon but is just depressing in the morning. I’ve been listening to Cornelius Cardew while late writing and my head is a mess of his blurred lines.

I scratch a plan together, catch a bus, a metro. The grandiose derelict factory by Xi Jia Wan metro station is now a flattened field, pocked with blue plastic debris. Within a month of being here, one of my landmarks has gone. 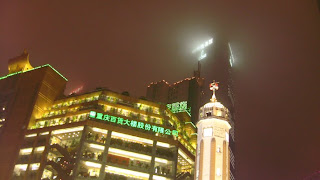 Next the tram and after a few of my habitual wrong turns I’m in Starbucks, an excellent place from which to observe the People’s Liberation Monument. The coffee is sweet bilge, as ever was, but it’s a vantage point and it also has the luxury of a flush toilet.

The monument is a ringer for a lighthouse, but sadly without the white stripes. It’s set on top of a chunky stone plinth approached by marble steps. Where the lighthouse beacon would be, the monument has four illuminated clocks, each prominently branded ROLEX (the Rolex store is opposite).

The monument would once have been impressive, but now the department stores and offices of the city centre out glitz it with consumer disposables and illuminated logos, and out-scale it too, their top storeys dissolving in mist. It seems a far-flung outpost from 1949 when the PRC was born. The people of CQ now do march bys in anoraks and puffa coats and undistinguished 21st century rainproofs. Their real glory today is their umbrellas, which come in many varieties of delicate primary colours, like an ever-changing Spring flowerbed.

From here, sat so close to the Starbucks sign that I can touch it - there, I just have - I can see logos for Mazda, Lexus, TODs (who?) Kinderlite (also?) Sheraton (tho the S is backwards, curiously) and Cartier who are on the other side of the plaza to Rolex and obviously lost the battle for branding the monument. Down aways are McDonalds and KFC.

But people seem to love the Liberation monument, whatever its aesthetic shortfalls. It was actually built to commemorate liberation from the Japanese after World War 2, but it seems to have become a beacon for a greater Liberation too. Every few minutes a new couple have their picture taken in front of the inscriptions detailing its importance. They have a relationship to their history and how it disjuncts with now that I don’t begin to appreciate. At once proud, mocking, decrying and idealistic – perhaps people here don’t fully understand it themselves either, as we all move around the pivot of the future. And whatever the future was and what it will be is changing fast as the patterns of the umbrellas below. 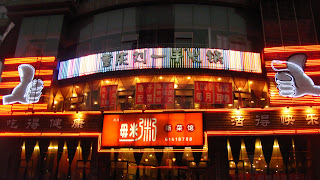