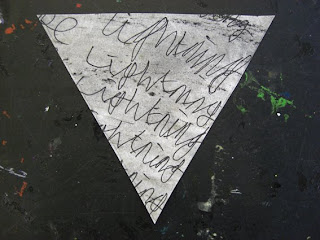 As part of the 'Eyebright' pilot project during our artist residency at Delamere Forest School, we looked at the 8 Stages of Genocide, for direction and inspiration.... Stage six is Preparation:

6.   PREPARATION:  Victims are identified and separated out because of their ethnic or religious identity.  Death lists are drawn up.  Members of victim groups are forced to wear identifying symbols.  Their property is expropriated.  They are often segregated into ghettoes, deported into concentration camps, or confined to a famine-struck region and starved.  At this stage, a Genocide Emergency must be declared.  If the political will of the great powers, regional alliances, or the U.N. Security Council can be mobilized, armed international intervention should be prepared, or heavy assistance provided to the victim group to prepare for its self-defense.  Otherwise, at least humanitarian assistance should be organized by the U.N. and private relief groups for the inevitable tide of refugees to come.

Quotes from The 8 Stages of Genocide by Gregory Stanton, President of Genocide Watch.
Posted by arthur+martha at 05:09