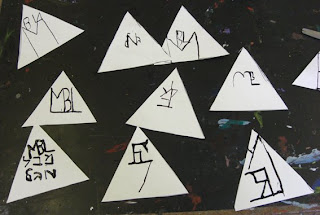 This is written in the evening of the first day of our residency at Delamere Forest School, which is a school for (mostly) Jewish students with special needs. A first day of trial-and-error experiments.

Our idea was to use the ‘eight stages of genocide’ identified by the Genocide Watch organisation as a framework for our work. We would play with visual poetry ideas engaging with each stage of the eight and make work that examined or contradicted each stage. The poems would be in the shape of triangles, recollecting the triangle badges worn by concentration camp prisoners during the nazi regime. But in contrast to the purpose of the original ‘Winkel’ badges, we would make pieces about the unity between people, the things that bring us together rather than divide us and also celebrate the quirks of individuals. That was the theory.

However we decided not to directly talk about the holocaust on the first day of sessions – didn’t want to launch into that dark place too quickly and without knowing our companions - so on this day we mentioned our main subject only by implication.

Nevertheless, the students piled in with great gusto, making pieces full of vigour and humour. We were working with dip pens and it was a pleasure to see the wide variety of expression in the marks, the discovery of new modes of communicating. Just as the pieces of art assumed character, so the characters of the students began to shine through and we began to make friends. In fact, meeting people was the biggest part of the day.

The triangle badges became more accomplished through the day as our focus sharpened and we began to fine-tune ideas. The art in making group pieces like this is in finding the rules of play. The makers’ work should be complemented by the process given to them. The balancing act we are trying to pull off is complex. Eyebright needs to be simple enough for many people of widely differing abilities to join into. At the same time it needs to reflect upon an extremely traumatic and knotted area of modern history. 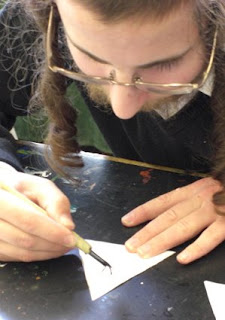 By allowing both complex and much more physical and raw work – and by allowing in people whose vulnerabilities become another layer of saying – we hope to make a delicate, elliptical piece. The result of the first day: thirty or so triangle badges which are full of wit, personality, cheekiness, resistance, petulance, fun, consideration – in some tiny way antidotes to the original triangles and their terror.

This project has been made possible by the generous funding by Sparks: The Clore Jewish Development Fund.
Posted by arthur+martha at 03:23

As someone who left Delamere in July 2008, it was great to see some photos of the school, even though the focus of the photos is on the artwork and not the pupils.