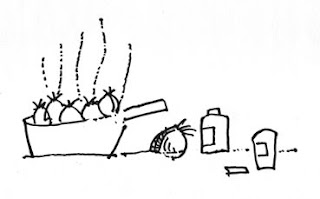 We’ve been working on the Kindness project over the last year at Morris Feinmann Home in Didsbury, putting together a collection of works called Paracetemol Soup, a mix of poems, artwork and recipes. This piece was launched at MFH in June 2008, as a limited edition series of giclee prints. The collection intercuts older Jewish peoples’ poems made from early memories with recipes and artworks; it is a subtle meditation on the holocaust, including contributions by holocaust survivors.

The next stage of our activities at MFH will be for Bring Light Towards You, a large digital textwork to be launched at Piccadilly Railway Station on Holocaust Memorial Day 2009. We’re delighted to say that this project will have the involvement of Imperial War Museum-North. We have begun piloting this piece, testing the idea and our approaches.