The story of Rumplestiltskin is the story of naming, the power of giving names. In order to escape the spell cast by the mischievous Rumplestiltskin, you first have to guess his name. This session for the Sing Me to Sleep project also explored the possibilities of naming: a writing exercise in which participants named a problem they wanted to shed and then put it into a bottle, leaving it behind them.

Once again a little gaggle of writers pursued the age-old shape of a fairytale in order to find their own truths. This was a session that I'd thought might become heavy, weighted down with the job of facing fears. In fact, it was a light-hearted afternoon and the pieces of writing that emerged were joyously silly, mocking the demons in their bottles: "Rumplestitlskin you're a bumpkin!"


But today was a breakthrough for another reason. This was the session in which the collective stitching on the quilt finally clicked. A group of men and women sat with this strange cloth of dreams that we are constructing and they stitched as never before. In fact they didn't want to stop. There is a power in seeing this group of homeless folk stitching that is hard to imagine. It brings with it a peace and concentration that is rare in the centre and (from our understanding) rare on the street too. 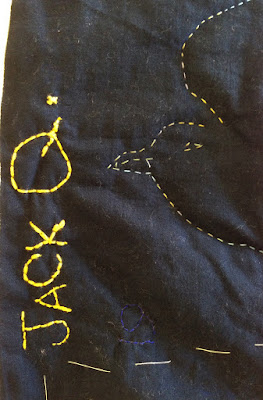 People were stitching their names onto a tree trunk in the forest that the quilt depicts. They did it carefully, slowly, talking quietly as they worked. As one of the participants left, he said, very simply: "Thank you, that was good." For a little moment, it felt very big.