‏Dementia vs the remarkable charm of spinning tops

Dementia clearly ransacks people's lives and yet who is to say that burglarised minds are not still full of richness and value? And, as for all of us, these lives need acts of explaining, reflection and reinvention if they are to have meaning. But what happens if the tools to make and explain - language and gesture and logic - are radically altered by disease, or even stripped away? The tendency then is for things that  create meaning, like conversation or writing or art making - to be neglected because it's so difficult to find new language forms, new ways of making.

For the last year, we been inventing playful creative exercises that go along with reminiscence sessions - some of which are for folks who have a dementia diagnosis. When we hit on a success it is a wonderfully satisfying moment because not only do we have the pleasure of a goal achieved, we are also rewarded by the pleasure of the people in the session.

Today we tried out what might seem the simplest thing but turned out to be a solid-bottom Class 1 treasure - spinning tops. Lois had gathered together a  selection of old wooden toys for people to handle and to reminisce about. Amongst them were three wooden spinning tops - and an exercise she'd come up with for making self-decorated cardboard spinning tops. 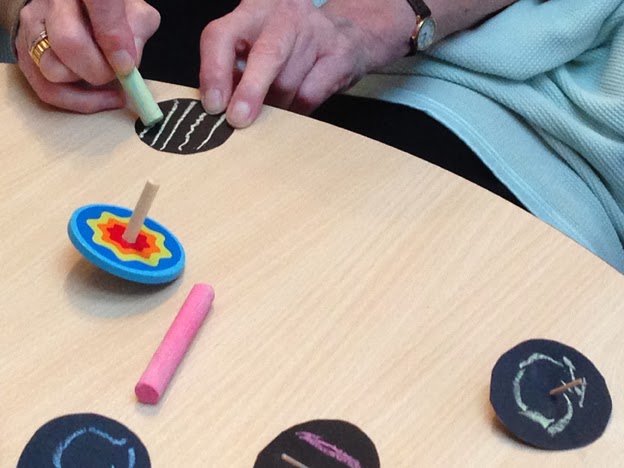 As soon as the tops made their entrance, the session changed tone. One of the men, who'd been locked in repeat-play of a memory from 50 years back, suddenly blinked with recognition - he'd seen an old friend. His face was suffused with warmth, eyes bright. He grasped this tiny wooden toy in his big, gnarled hands as though it were a rare visitor to a lonesome place and he named it, seemingly delighted to find the words on his tongue: "A spinning top!"

The tops ushered in memories of childhood but also muscle memory - most people in the group had a go at spinning a top. This was something that could still be done! There was a rustle of approving interest. Lois then played her trump card: would people like to make and decorate their own spinning top? Discs of black card were cut out. People decorated them with chalk marks and the discs were then skewered with cocktail sticks, ready to spin. The spinning patterns made bright little eddies of colour, bringing exclamations of pleasure.

I'm aware that in writing, the activity might seem childish, to some. But I'd dispute that. These pieces documented a journey back into childhood made by people for whom memory can hold many terrors. The marks on the tops might not be decipherable into English or Art or any other familiar mode of communication, but still they represent the continuing human drive for self-expression, which is a profound need that arthur+martha try to provide for. Just as angels are said to dance on the heads of pins, these spinning tops carry remarkable dancers. 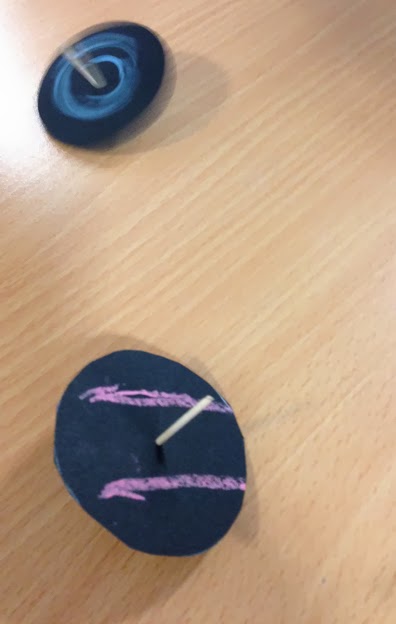