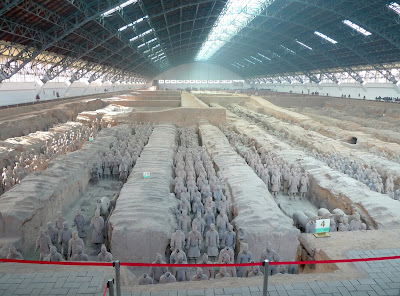 If you happen to find yourself in the walled city of old Xian you might think of visiting Lao Sun Jia. Climb some wooden steps between janglingly bright neoned shop fronts, part a polythene draught screen and you'll find yourself in a restaurant that's a venerable 100 years old. It looks like a Brit burger bar from the 1970s, all beige and formica, but the food is fit for picky kings. Julia and I stumble in, late evening, and within minutes the table is a mini-banquet of Yangrou Pao Mo, a lamb broth with bread crumbled into it, stir-fried pepper and beef, and - most spectacular of all - roast lamb and wolfberry. The sauce is a dark chocolatey sheen dotted with red flecks of the fruit. With our meal, come ale glasses of local tea. Within each glass are berries and flowers. It's like drinking the taste of a summer garden.

Xian sits on the Silk Road and part of this legacy is Muslim-influenced cookery. The city has a Muslim quarter near our hotel. The other legacy is the abiding principle of fear as a key to power. The city walls are 12 metres high, 14 km long and wide enough to accomodate a major road if you wanted to run one along it. A further outer wall, now gone, was seven times the length of this. Streets are a grid, typical for a military-friendly city - it's easier to crush rebellion.

Outside Xian, below ground level, is the city's most famous heirloom - the terracotta army. They are the death guardians of the First Emperor Qin Shi Huang, a man who both united and terrorised his subjects. He particularly liked burying people alive and it seems appropriate that those terracotta companions of his were not only buried, but are themselves made of clay. All returns to the earth, the lesson of Ozymandius. Although his army has been disinterred, the First Emperor's personal tomb has not been excavated. It is reputedly full of traps, mazes, underground rivers of mercury.

We walk around these hordes of clay people. The scale of the enterprise has a kind of wild triumphalism, as if Qin Shi Huang was going head-to-head with death. Or as a canny powerbroker, that's perhaps what he wanted people to think. It's a strange, dazing place - an archaeological dig the size of a battlefield roofed over aircraft hanger style. The army are in battle array, readied in columns. A few are separate from the main horde for close inspection, among them a ringer for Joe Stalin. I photograph some of them and text the picture to Trehy for his birthday message; he has a collector's fondness for autocrats. 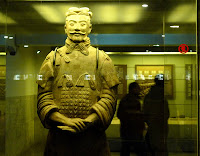 Posted by Philip Davenport at 01:54