We are flames not flowers: Bhopal survivors film 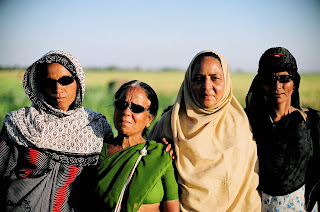 Last weekend I was lucky enough to meet the artist Daniel Gosling who uses walking as part of the making of his art. He sent me a link to a film he shot in 2006, accompanying survivors of the infamous Bhopal disaster on a 34 day protest walk across India. We're very proud to link to the film on our blog, it manages both to be beautiful and have a social conscience.

"In 2006 survivors of the Bhopal gas disaster (1984) walked 800km from Bhopal to Delhi. Their aim was to publicise and protest their continuing neglect by the government of India and Union Carbide/Dow Chemical's toxic legacy in Bhopal. The walk lasted 34 days. I walked with them every day of it." (Daniel Gosling)

Watching the film, I'm struck by the power of witnessing incidental details. Conversation snippets, jokes, glances - in a tiny space of time the film manages to catch a massive event by showing the small moments, rather than the grand. People walking with their backs to us, shared laughter, someone's foot twitching while they're asleep, an umberella painted with the slogan We are flames not flowers. It sidesteps the stale cliches of news reporting and also the documentary trap of unearned catharsis. Enough to see these people's faces and to acknowledge them, not as victims but as fellow folk, as you and I.

To view the 10 minute film on youtube, click on the orange title at the top of this blog: We are flames not flowers, or go to http://www.youtube.com/watch?v=GdTL9BJOum4

Daniel has put the film on youtube under the title: Bhopal Survivors Fighters Walkers (short version) 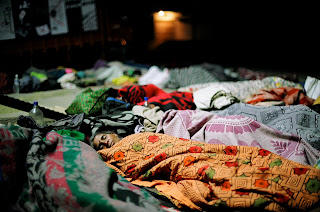 Note: Rashida Bee and Champa Devi Shukla were nominated for the Nobel Peace Prize and together won the Goldman Environmental Prize. Arundhati Roy can be glimpsed in one scene...
Posted by Philip Davenport at 02:42