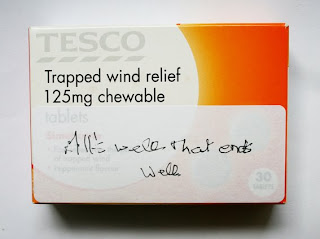 arthur+martha are delighted to feature in an article in today's Guardian (Society section, page 2) about their experimental work in the arts and health field, particularly with older people. Since the organisation launched in 2006, they have pushed at the boundaries of poetry and art, collaborating with people in hospitals and care, to create intricate patchworks of memory, humour, playfulness and sadness. arthur+martha projects include the recent holocaust memorial animated textworks shown on the electronic billboard at Piccadilly Railway Station and their current exhibition Paracetamol Soup at Central Library, Manchester (until 6th May).

'The artists don't mind that the older people sometimes see them as "a bit daft", and the results of their collaboration are often amusing. A packet of generic wind relief tablets was cheekily relabelled: "All's well that ends well." And a postcard bears the words: "Skint. Send cheque immediately (If this is dying, I don't think much to it)."
...'
Posted by arthur+martha at 05:58