PHILIP DAVENPORT WAS POET IN RESIDENCE AT INTERNATIONAL SCHOOL HAGUE FEB-MAR 2009, WORKING ON THE GRIN VARIATIONS A POETIC COLLABORATION BETWEEN STUDENTS AT THE HAGUE AND AT PARENTHORN HIGH SCHOOL IN THE UK, AS PART OF THE 2009 TEXT FESTIVAL. DAVENPORT ALSO DEVELOPED HIS OWN ONGOING PIECE A SHARED LONELINESS. 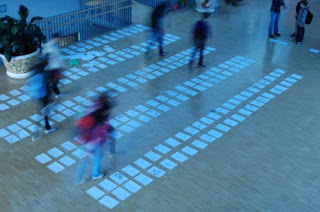 One of the delights of the world is making a mess. Over three weeks I aided and abetted students at International School Hague (ISH) as they splashed ink across paper (and desks) held pens in their teeth to write and abused photocopiers. This was the ISH instalment of poetry project The Grin Variations. The freedom to mess up, in all senses, is one of the greatest human liberties. With it comes a rush of creative ideas and this is what I’d hoped to capture – serious play.

The Grin Variations is a giant poem made up of hundreds of individual pieces written by students of all ages, mostly attendees at Parenthorn High School in the UK, the rest at ISH in Holland. It is a visual poem, in the form of a short film made out of handwriting, intended for the screen rather than the page. The project is part of the international Text Festival in the UK, which brings together poets and artists who are interested in the outermost possibilities of the word.

For three weeks, I early morning-ed on trains and trams from Delft to ISH in Den Hague, bringing my collection of ideas and a hankering for caffeine. Students were shown the visual (or ‘concrete’) poem Grin by the celebrated British experimenter Bob Cobbing - a deceptively simple piece of writing in the shape of a smile. I then asked students to make their own variation on Cobbing – using dip pens and ink and the priciples of concrete poetry – to employ shape rather than rhyme and rhythm to make poems.

People don’t use dipping pens and ink anymore of course (but why ‘of course’?) and many young people don’t write by hand at all if they can avoid it. The sense of touch has been removed from their communications; the trace they leave is a digital one. But losing the physical act of writing can strip words of expressiveness. Shake, blots, imperfect lines tell us much about the writer, just as hand-making anything gives it a unique human presence.

The project is divided into three sections (one for each of the large screens in the plaza at ISH) Grin, Green and Grim. The Grin pieces describe the act of smiling – many of them are joyous little riffs on happiness – others delve the complexity that a smile can portray. The Green pieces are both a celebration and a damnation of mass-produced objects, especially cars. Finally, Grim brings destruction – verses mostly made by cutting up and processing war reportage in newspapers. Put together, the three are reflections on pleasure, consumption and violence – as viewed by young people – and they collectively ask the question: what lessons do we really teach our children?

My three weeks at ISH were a tumble of feelings and faces. Most people welcomed me. I was touched by the attentiveness and thoughtfulness of the creative writing group. Conversely, the sheer exuberance of the primary schoolers gave me a much-needed jolt on a sleepy morning. The art department were my base – their openness to the idea that poetry and art can cross borders into each other was heartening. Head of the department Mark Jalland helped organise my residency, lent his house and was a constant support along with Johnny Regan. The English department were more cautious because I come from an avant garde tradition that hasn’t yet percolated into the syllabus – but very graciously let me into their classes, despite the ink spillages. Carrie Stockwell – whose students were enthused by her inspirational teaching – was especially kind.

Standing clearest in my memory are the students who plunged so enthusiastically into it all, especially the team who helped with the editing of our work-in-progress Filip, David, Desiree and Yakayaki and Charlotte and Alexander who laid out hundreds of manuscripts from ISH and Parenthorn in the school plaza, under the watchful eye of Uka, for an impromptu showing. What we saw laid out for us on that day seemed to me a kind of handmade mirror of the media, reflecting back the litany of pleasure, consumption and war that the papers offer, the more poignant for being the work of children.

The Grin Variations is a partnership project between Parenthorn High School in the UK and International School Hague, devised and overseen by poet Philip Davenport. It is supported by Bury Metropolitan Council and Stroom Gallery, Hague, with additional support from Arts Council England. The project will be exhibited as part of the UK Text Festival in the UK and Holland from 30th April – mid-June 2009.
Posted by arthur+martha at 03:54