From our forgotten correspondent

The 'map of you' postcards carry tiny stories, little snatches of homeless people's lives. In the white space between the buildings, the stories appear, some stencilled, some handwritten, some self-explanatory, funny, dour, elusive. They've often been made under great duress. People have been high, or crying, or trying to make a housing appointment, or a deal, or trying to sell The Big Issue. They're moments grasped as they melt. 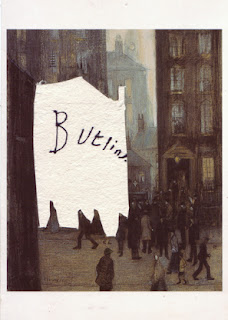 At other times, people have sat with us for longer sessions, longer journeys. At the Red Door in Bury and at the Booth Centre in Manchester, people have explored their own edges. At times, people dismissed the postcards on first look, then looking closer discovered something of themselves. Many times we have introduced ourselves to the group and the idea, and before we have even started a discussion, participants have grabbed pens and written free form on the cards, in a passionate response.

Perhaps the most important thing is that the work is made by people who're living through crisis. As L, a 'service-user' in Bury said: 'People who suffer have knowledge.' The skin is thin and through it they feel the world intensely and report it with great vividness. 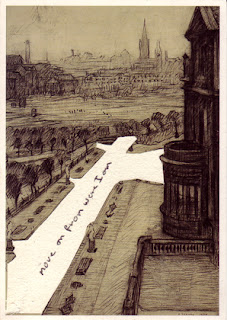 These reports on the world are from our own forgotten correspondents, people we might pass everyday without registering. But they see, they've no choice. To relax - to close their eyes - would be to make themselves even more vulnerable to attack. Stare hard enough and long at something you can observe the deeper structure, the bones.

The art and writing made during this project is starting to become whole, a body of work. A living body, a post-mortem body, take your choice. Evidence perhaps. What is the story that's being told? Many of the pieces are simply about desperation, the heaviness of being alone in a hostile environment. There is mourning: lost innocence, lost families, lost love. There's a yearning too, for shelter and kindness. And there's resilience, often in the form of humour, anger, friendship. Finally, many people told us don't want money, or even help, most of all they want acknowledgement. To be seen.

This point was emphasised several times by C at The Booth Centre - the horror of invisibility, of living in a place where, as he expressed it, "Society wears blindfolds."

In the blank spaces between buildings on the postcards that we've supplied to write in - they have appeared. Some of them are beautiful in their manifestation and all come hard won. Homelessness can happen to anybody - after a horrible series of events it could be you or me on the street. 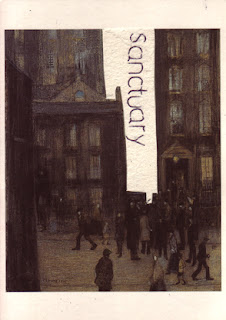 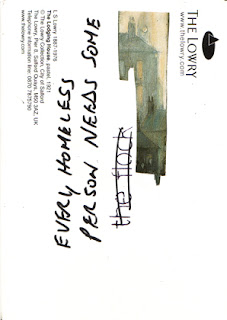 Lawrence Weiner told me (the one time we met) that, 'Art is useful. It helps us to live.' These encounters and the work that's come out of them has helped me to see my own life differently and the greater workings of the society we're all held within. The voices of outsiders always have called to me because they seem to transcend those walls, to come from a bigger world. Perhaps they'll speak to - or for - you?
Posted by Philip Davenport at 05:28