2016 has been quite a journey. It took us to the Houses of Parliament, the Southbank and the National Gallery of Lithuania. Phil is currently working on our asylum seekers project in Berlin. It's also been a journey to the edge of our comfort zone on a few occasions and to the edge of our abilities. What's put heart into us has been the people we've met and those who have travelled with us. Particularly the participants in our projects with the homeless community, who've been ambassadors for better awareness of homelessness nationally and internationally. 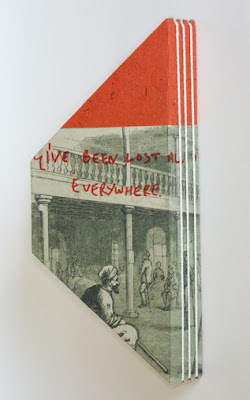 2106 has also seen the continuation of the series of arthur+martha quilts that document the lives and insights of various communities we've worked with, especially the homeless community and older people in rural locations and people with dementia. The Stitching the Wars quilts are the latest addition to this series, telling the story of rural communities in Derbyshire during and between the world wars.

Slowly, slowly, we are constructing a previously unwritten history of Britain, using art and poetry, in collaboration with people who are older or homeless. We are centred in North West England but we exhibit work internationally and nationally to make sure these voices are heard. We challenge audiences by confronting them with the common humanity of people who are excluded. We hope all involved in our projects have the opportunity to grow to change - and to celebrate their lives. This work is now intertwined with our lives too, it's become a treasured part of us. We would like to thank everyone we've met over the last year - and to wish all a very happy and safe 2017.


Posted by Philip Davenport at 10:24 No comments:

At the heart of the museum

On Tuesday we had an opportunity to celebrate two projects, in the beautiful, inspiring setting of Bury Art Museum. The exhibition brings together two separate projects,   The Homeless Library and Sing me to Sleep,  two projects with much in common:  The people who made them – groups of homeless people living in Manchester and Vilinus, making artworks, poems, telling stories…

BOTH highlight the importance of self expression- as one of the deepest human needs, it defines identity, allows change and brings joy.


One of the highlights of Sing me to Sleep, was our group trip to Vilnius in Lithuania. Our hosts Socialiniai Meno Projektai, and the National Gallery of Art, welcomed us… Showed us around the city-  Opened our eyes- Inspired us- These projects give us all a sense of pride and value in making and displaying the artwork produced. We were very lucky to have artist Egle Gudonyte the lead artist for the project in Lithuania come to opening of the exhibition in Bury and speak.


Thank you to The Booth Centre and everyone else who came along and enjoyed our celebration, and the Museum for the wonderful space, right in the heart of the museum, their support and hospitality.

The exhibition continues at Bury Art Museum until 21st January 2017.
Posted by arthur+martha at 06:09 No comments:

The Old Man and The Sea

Heaven-Proof House is a poetry project based in Berlin, devised by Philip Davenport from arthur+martha CIC and supported by the British Council and Arts Council England. The project continues the arthur+martha strand of international work with marginalised communities, connecting people across borders and boundaries.

Karim is an old man, it's how he describes himself, and how he's described by everyone else at the asylum seekers' centre in Spandau. The Old Man. His eyes are not good and he runs out of puff easily. But he has great dignity and a big measure of courtesy too, both of which are maintained at all times.

Because Karim speaks both English and Arabic, he is a good connector between myself and everyone else, so I've been directed to his room. We have conversations about his life, particularly puzzling through recent events. He is now in Germany, having fled his homeland for fear of his life. To uproot and shift not just your home, but your culture, your society, your language, your everything is hard at any age. When you are into your later years, it can be overwhelming. For The Old Man, some days are exhausting. When we talk in his room, people pop in and out with food, text messages appear on his phone, arrangements are made.

He is interested in making a poem. And he tells me about his journey to get here from Iraq. And the first time he ever saw the sea.

The illustration is by Ali, one of the artworks made by children at the Centre during my ongoing workshops.

Karim and the sea

“We passed that way by night,” they said. “If someone
for whom you pine be there, the wayfarer has no knowledge.”
(Abu Sakhr al-Hudhali)

I am sorry to travel across the sea
From my country. Very difficulties
Suchlike: cross sea, spend moneys.
But we arrive and these difficulties
We hope they will be losses, we hope
I and two daughters and
Many neighbours, 43 persons in same boat
In same small boat.

When we reach this little boat
I think: how can we cross this sea?
43 persons we reach to the island
Samos the island which we reach
We spend eight hours from Türkei
The sea was quiet, dark
Weather not in winter.

You know when you spend eight hours
It is very long at sea.
We have smell benzene from motors
From the motors
And we have make sick every time
The motor not good.

In Turkey every time they say
"You and your family today shall travel."
They promise and don't do
They take money also, throw luggage in sea
Anything in sea.

We make some signal to the coastguard
They come make big rope, pull us from the sea.
This was the first time I saw the sea
Sea is very big.

A wee light at the end of the tunnel


Yesterday saw the exhibition install of two arthur+martha projects at Bury Art Museum, The Homeless Library and Sing me to Sleep, a British-Lithuanian art project.

The Homeless Library, is a fraction of a heritage: the unwritten, unheard stories of homeless people. The exhibition in Bury shares 50 plus books, full of artworks, poems and interviews. 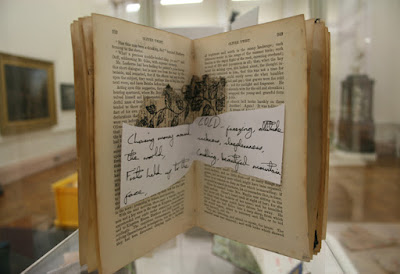 Lawrence identified one of the problems with showing artist books behind glass: 'you only get one page of the book, it's like only getting one page of Alice in Wonderland, you're not getting the full story- that's why I flattened that one out (Riff Raff, shown above) so you could read the whole thing.

Another member of the group pointed out: you might only get one page of each story, but it all comes together with snippets of other peoples stories... 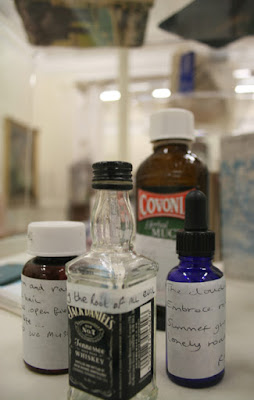 For the install of The Homeless Library, I was joined by Gary, Howard, Masoud, Lawrence and Paul from The Booth Centre, (a day center for people who are or who have experienced homelessness) Over the last few years, Phil and I have learnt so much from The Booth Centre and friend to arthur+martha
clinical psychologist Polly Kaiser, about the importance of participants being involved at ever stage of a project, of finding ways of this not being a token gesture, but a opportunity to truly learn from each other.

Leaping from the success of the Homeless Library presentation at The University of Glasgow,  I stood back and handed over the curating to the rest of the group.

As soon as the cases were open, they got on with the task- made all the decisions as to what was going where, read the books carefully and decided what pages were to be left open, and all done in such an amazing co-operative sensitive way- no bickering, no ego, but respect for each other and the work, the results are wonderful, the group added a great richness and freshness to the exhibition.


Sing me to Sleep / Padainuok man labanakt is a British-Lithuanian project. People who are currently homeless or who have experienced homelessness, worked with artists from arthur+martha and Lithuanian Socialiniai meno projektai.  The projects explored the tangled forests of fairytale, childhood and their current life.

We are delighted that Egle Gudonyte,  the lead artist in Lithuania brought to England a beautiful and thought provoking intervention to the gallery. The installation is just a fragment of the overall collaboration in “Sing me to Sleep”. In its modest scale, it connects the nature and human acts that can be found in both life, and fairy-tales: walking, confronting hunger, finding a shelter and the pursuit of happiness.