Walking From the War Zone


The arthur+martha international outreach project Heaven-Proof House is a collaboration with refugees in Berlin, devised by Phil. The project is based at an asylum seekers' centre in Spandau, where residents have kindly granted interviews, made poems and artworks. The artwork above, like most artworks for this project, is by a child at the centre.

"She is walking from home right now, at this very moment. She is walking with our one-year-old child from Aleppo to Turkey. She's travelling by herself, walking away from the war zone. She has a cheap mobile phone but the signal is bad. Sometimes all trace of her will disappear. To cross the border she will need to pay the human traffickers 1500 euros. But when they get to the final crossing point she and the child must go alone."

Said is telling us this. He peers over the top of his glasses like an old-fashioned librarian. His remarkable eyes are a deep brown and they are full of worry. It is impossible to escape the gravity of those eyes. He is perhaps 40 years old, but seems far older. His room in the asylum seekers' centre is impeccably clean. The last occupant was ill and had left it dirty, but now it is renovated to a bright spotlessness. There is a large photograph of a dew-covered rose on the wall, a bed, table and chairs, a television in one corner.

We are in "da heim" in Spandau, Berlin. Said's wife is hundreds of miles and two borders away. He explains the situation, in a mix of Arabic and German, to Barbara, Aymen and myself. Barbara and Aymen then pass it onto me in English fragments.

But however much Said explains, I cannot seem to fully understand. This is not about a failure of language it is about failure of experience. Some things need to be lived to be understood. This is a little of what I've written in my notebook:

His wife
Left Aleppo today, mit kleine
By foss
(Mimes action of walking with fingers)
By foot. You understand?
Left Aleppo today, they walk. 1 years old boy. His wife.
Walk to Turkey.
Because she has appointment with Embassy
But they won't let her go through
No other way
In ein gruppe? Nein.
No. She's not walking in a group
Only with her baby.
The only chance she has
To find her way is to go through quietly

(Shows route on mobile phone, google map
Near a forest, near a border)

She has no papers. If she gets through, it just depends on the day.
This is the only chance.

Said now shows us a phone photo of his tiny daughter. She too has fantastic, intense eyes. All of us grouped around the camera give an involuntary gasp. Said says: "The waiting time kills you. You wait, you waste time and wait."

I say that he is a very gracious host. In his shoes, in his situation I doubt I would be as calm, or considerate. He looks at me, thoughtfully and replies: "When you don't have another option, you have to wait."

Posted by Philip Davenport at 12:31 No comments:

arthur+martha are pleased to announce that we have been awarded Arts Council Funding for a new pilot project called 'Armour'.

Armour will be a six month pilot project with homeless veterans, developing creative ideas based on medieval armour. How can veterans live peacefully with the memory of war? We will re-think, re-examine, re-create quilted Medival armour, as garments embroidered with meditations on war and peace. 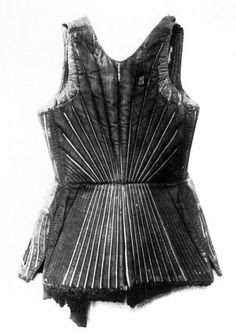 Workshops will discuss how we protect our deeper selves and how we heal. Discussions will be edited to create a collection of poems. Based at The Booth Centre homeless resource centre in Manchester, we will train peer mentors, involve organisations working with veterans, partner art/museum venues to research and exhibit the artwork.

Like any new arthur+martha project, I am sure this project will stretch us into profoundly new areas of working, that will bring us many challenges, but will also bring us joy,  open new approaches, audiences and collaborations.

Posted by arthur+martha at 07:36 No comments:

Tottington Library: Things to Do 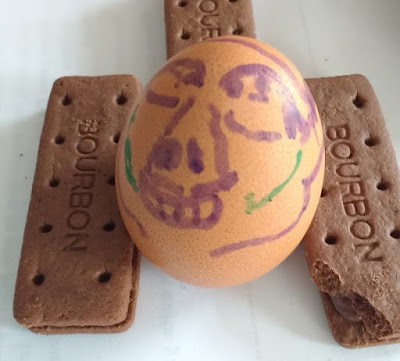 As part of the project 'Things to Do' yesterday Jeni McConnell and I were at Tottington Library, Bury.

Things to do is a pioneering pilot project, a collaboration with people living with dementia, their carers, arthur+martha, Bury Council and others, redefining relationships with art, carers and the self. It is resulting in workshops and test-driving of draft pages of a creative activity book.

A tricky thing for both Jeni and I was to sit back and simply observe the session- our natural instincts are to 'be on the job', to constantly engage with people, checking group dynamics, pacing the session, trying to find ways for everyone to have opportunities to be involved with the activity. Yesterday that role was challenged, our task was to allow failure or silence to happen.

It was an important lesson on letting go. Things didn't fall apart, the group (in the main) looked after its-self. The instructions for the activities were followed, and in the discussion towards the end of the day, we were told the mock-up pages were clear and informative. Jeni and I still leant a hand, encouragement and advice where needed, but held back much more than normal. There weren't silences, it didn't all fall apart, there was a lot of laughter, and quite a lot of art making. 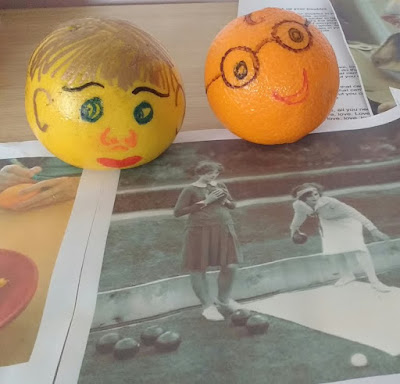 The game of fruit boules was interesting to watch as participants began to roll their decorated oranges along the floor – no messing about with moving tables – most just got on with it from their chair and dodged the table legs. I loved watching this - there was some serious concentration on faces, judging which direction was needed and how fast to roll – I am convinced some folks have been pretty good bowlers in their time! Smiles and laughter filled the room – the library visitors must have wondered what we were all up to!   Jeni 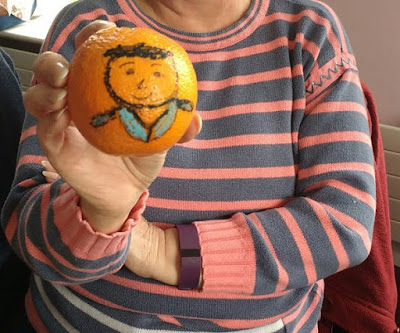 Thanks to Making Space and all the group for making us all so welcoming and helping us with our project. On a very sad note, the wonderful, important resource Tottington Library,  Bury is closing Saturday 4th March 2017. The closures are part of a saving drive by Bury Council. There is an online petition on-line here. Prestwich Library, Bury has already closed, also Unsworth, Radcliffe Library is due to close in August.
Posted by arthur+martha at 03:17 No comments:


The arthur+martha international outreach project Heaven-Proof House is a collaboration with refugees in Berlin, devised by Phil. The project is based at an asylum seekers' centre in Spandau, where residents have kindly granted interviews, made poems and artworks. The artworks below were made by children at the centre, "da heim".

My time in Berlin is built around meeting people and sharing conversations. Today I'm going to be introduced to Yasir. He has come from Iraq and is remaking his life, after escaping prison and torture.

The introduction is made by Aymen, who is kind enough to act as translator. Aymen and Charlotte both work with the Kunstasyl arts organisation and they want to give Yasir a small birthday party, to which I'm also invited. "He's not celebrated a birthday before, it's not traditional in Iraq. But I think it's important, embracing existence. Some of my favourite days in this place have been birthdays."

Yasir is a man whose warmth and humour shine. Everyone looks happy when they talk with him, or about him. But he's been badly hurt and there's also a delicacy in our conversation, we tread carefully. Much of the communication is eye contact, a smile. 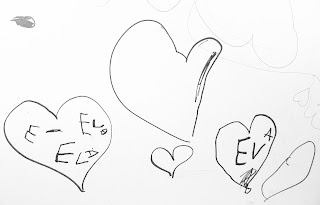 Aymen is an excellent Master of Ceremonies: "This is the first cake of the first birthday of Yasir," he announces happily. "It is also my birthday - ah, the people of December are special people! Today we don't talk of Mosul, because we want a nice day. I.S. is in there now. It's a difficult time. Sister, mother, father of Yasir, they are there but he has no contact. He hopes they are secure, but never knows if everything is alright."

This fact hangs in the air. We eat instead of discussing it further. The "cake" that Charlotte has made for this occasion is a wondrous fruit crumble. We crunch sugary mouthfuls. The apple and pear are soft and tangy. It is studded with coloured candles. This is the food of my childhood, a taste of home. Yasir crunches happily on the sugary concoction, he has a sweet tooth.

He says: "Next year when I have anniversary I will celebrate. You will all be invited. It will be a very big celebration."

I ask how to make new beginnings. Aymen says, "He was forced to leave his home country, to come here. He can never come back to Iraq. He is forced to live, learn, survive here..."

We pause to take some photos. Charlotte larks about as the pictures are taken and Yasir hoots with laughter. "He says: it's the day to start a new life, it's nice to be reborn. He has had a bad, bad time in Iraq. Now he is healing, is with therapist. But always he has the sense of humour."

Yasir, translated by Aymen: "I start again here. I want to get residence. Took a course in the language school for 600 hours... I'm a professional embroiderer, a stitcher. Embroidering with machines in the old city of Mosul, traditional things. And army badges. Learned this trade in Mosul though have no piece of paper for it, no diploma. But I have found love already!"

Aymen breaks off from translating to add some details: "His girlfriend speaks my dialect. He wants to go to Tunisia to be with her they met on Facebook, they play games and talk talk talk. Beautiful."

I ask Yasir what the best moment in his life has been. Aymen shakes his sadly head as he translates Yasir: "It is not easy to say what is the best thing, because I was born in 1986 and I live only in war in Iraq. I was living with my parents, I was the only child of my parents. Eating together, playing together. Until 2003 it was okay: working, coming back home to a simple life. From 2003 until now it was really bad.

Charlotte again: "For us who live our life in Western Europe, we can't really talk about war. But when somebody like Yasir describes this, you listen. When you are European you don't know about war and when it's discussed you feel like you're judging something you don't understand. It's a relief when someone speaks the reality."

My final question is to ask Yasir what makes home. Yasir: "I feel at home wherever I feel like a human being, whenever they treat me like a human. Until I came to Germany I didn't feel like a human, now I feel part of something good. I can change things, the big things and the little. Like the colour of this wall."

The wall has been painted with a shocking pink rectangle. A single joyful statement in colour. Yasir strokes it affectionately. Aymen explains: "Yasir was in prison two times for no reason. He was tortured. The colour of the corridor walls here is a bad colour, an unfortunate colour. It is the same colour that they have in the prison, and in Guantánamo and it is the same colour in Abu Ghraib. Yasir really loves colour and one day I asked him, 'OK what colour do you want?' and he told me pink so we did that. Some days when he's feeling bad he can't bear to look at the colour out in the hall, because it reminds him of the prisons and so he stays in his room, with his pink wall."

Posted by Philip Davenport at 11:14 No comments: