You can be my little bodyguard

a map of you

The familiar smell of hospital envelops us and we're in. The psychiatric ward at Fairfield Hospital in Bury is (depending on your view) a locked door, or a secure haven. We've been brought here by Paul and Sue at Bury's IGNITE adult learning project. They often work with homeless people and some of these folk pass through the psychiatric ward. We sit with a gentle, quietspoken group downstairs in the ward. The conversation is delicate, taking small steps. We talk about comfort and happiness. The man next to me says: 'I will be happy, won't I?' It sounds like a plea. As we talk the sunshine bounces around the yard outside. A woman describes her love for music, 'Rachmaninov, can't understand why he's always second to that Vaughn Williams in the polls.' An older man talks about walking, whilst staring at the shimmering light outdoors.

We work for an hour, then go upstairs to the next floor of the ward. The air is hotter and soporific. People here are more obviously damaged. S speaks in broken English of his home land The Czech Republic with a mixture of affection, anger and fear. There he suffered racial abuse, then in England the break up of his family, the loss of his home and job.  He has the most torn-up and re-stitched neck I've ever seen, scars the size of a starfish clamp onto his throat. P has tattoos instead of scars and talks of her moodswings, selfhate, abuse. But as she works with us, she rallies and challenges her own self-definitions. In her piece she becomes a column of power. 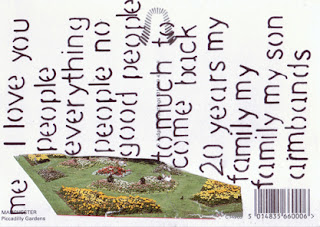 The afternoon session is at Red Door Housing Centre with a group of homeless and vulnerably housed people. They're feeling a little shaky because someone they know has just died, possibly violently. We talk about survival, the things that make you tick. B has spent nearly three decades in prison and is a 'Survivalist. Been on my own since I was 11. I adapt. Life moves fast. Part of being a survivalist is adapting, if you don't adapt you're back in prison.' What's the trick to surviving, I ask. He looks at me from the other shore of a great, sea-deep knowledge. 'Instinct,' he says. It's a word that has come up many times before. Towards the end of the session, K comes into her own, with a string of funny, sharp little stories about her life in hostels and bedsits. 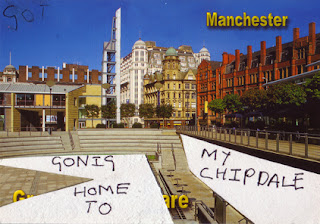 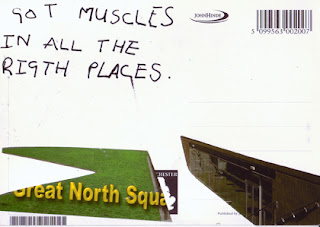 I took an immediate liking to K; before meeting her, one of the volunteers whispers her nickname 'Bubbles' and it fits, she's got the voice of Jane Horrocks, a small stature and eccentrically dressed. She does everything ten to the dozen, and I struggle to keep up with my note taking. My first question, 'What's the happiest part of your day' leads to her postcard piece (above) 'Going home to my Chippendale, he's got muscles in all the right places.' Through the session she gradually reveals truths about the vulnerability she felt living in B&Bs and in hostels, usually half hidden by the humour. I was scared in the B&B, but I couldn't show it. J who sits quietly opposite her, smiles as she explains she used to say to him 'You can be my little bodyguard'.   We end the session with K promising she will see us on our next session and will try to bring others with her.
More Photos at http://www.flickr.com/photos/arthur-and-martha/sets/72157626112536770/
Posted by Philip Davenport at 05:38

Email ThisBlogThis!Share to TwitterShare to FacebookShare to Pinterest
Labels: a map of you, arts and health, arts in hospital, Bury, homeless, mental health, North West