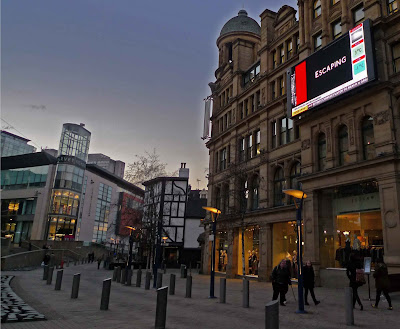 We first showed the animated textwork BRING LIGHT TOWARDS YOU at Piccadilly Railway Station in Manchester on Holocaust Memorial Day 2009. The piece is made of short poetic texts, memory fragments – they describe train journeys, recollected by holocaust survivors. This year, the BBC offered to run the whole sequence of ten 30-second films on their Big Screen in The Triangle, the posh heart of Manchester shopping. It felt like a strange and interesting juxtaposition, we agreed, on a busy English street (around 50000 people walk past everyday) next to a sign saying The Triangle.

The piece will be on view for ten days in all, dotted amongst news and weather reportage, trailers for the London Olympics and a smatter of other little experimental films. Some of BRING LIGHT TOWARDS YOU couldn't be shown at the railway station in 2009 - a reference to people throwing themselves on electric fences, for instance - so this is a first for the complete set. If you've time, go see. It's the oddest, saddest thing to be surrounded by the iconography of comfort-thru-shopping and at the same to be told 'RUN' 'ESCAPE' 'THE SS' – the signs whispering a past that's far beyond our normal edges.

For a long while I stopped reading about the holocaust: it gave off such hopelessness. Not only were the events themselves staggering acts of brutality, any attempt by me to reconcile them with understanding, let alone optimism, completely failed. The history makes a piece like BRING LIGHT TOWARDS YOU a shadow of a shadow. How can you understand this? Perhaps for most of us Holocaust Memorial is only ever a gesture of sympathy, rather than empathy.

When Lois and I went to photograph the piece on Holocaust Memorial Day this year, the air was ice – a viciously cold morning. People hunched by, deep in their coats. The jagged little war-stories onscreen seemed utterly out of place, like dreams. I thought about one of the holocaust survivors we worked with, a woman with profound memory lapses. She had been in Auschwitz, alongside her sister. The girls couldn't acknowledge one another; to do so would have meant one of them being killed. The guards wouldn't allow support networks like family to exist in the camps. So she became used to burying the truth. Decades later, this woman would have intense moments of lucidity while she worked with us and details of her experience would flare. But even as she revisited her memories, they erased themselves, a kind of self-anaesthetic.

I remember her saying: “I was there. I was in a camp...” and the rest of it was excised from her own mind before the next sentence was out of her mouth.

(Sections from BRING LIGHT TOWARDS YOU are shown approximately every half hour on the BBC Big Screen at The Triangle in Exchange Square, Manchester UK. There is seating directly opposite the screen, the piece is also visible from the cafes in Selfridges and Next. The 10 day run started on 27th January 2011. See also flickr site images from 2009 and 2011 at http://www.flickr.com
Posted by Philip Davenport at 10:26