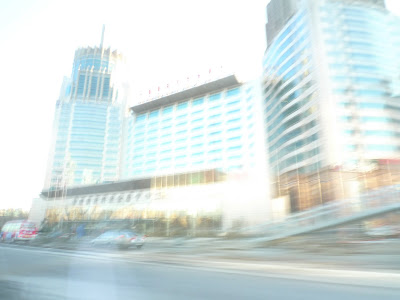 Is the idea of the self (itself) different in China? Maybe it's just that people are un/important in a different way. In the West, we make a great show of individuality, but the truth is that we dismiss the voices of older people, or the Roma, or the homeless, or the ordinary, or the suburban middle-agers, or the decried pram-face mums, or the ANYBODY. At best the Big Society rots down in the compost of a million blogs, like this one. Democratic people don't really have a swig of 15 minutes of glory, we are consecrated only by money and fame – the modcons of power.

Mao didn't bother fiddling around with subtle displacement activities. Such a liberal thing as an Individual was simply disallowed in his reign and in that of previous autocrats. So how does that affect people here? There are little enactments of difference scattered through my time in China and Beijing traffic is the latest.

The traffic in this city is, at first seeing, a hopeless chaos, a tangle of cars, trucks, bikes, pedestrians, police, all sharing too few lanes and in many cases the wrong side of the road. It's like a pile-up that still manages to keep moving. Pedestrians run at crossing points flocked together for safety, while cars jump the red and swerve through people gaps. Drivers hack bumper-to-bumper, leaning on horns and short-cutting outrageously, sliding between one another.

Is it because there's a kind of deep carelessness? Maybe on some level, people don't mind if either they, or others, are damaged. Are they depressed? I think of buildings in Chongqing being demolished by gangs of men with sledgehammers, hundreds of feet up in the air, smashing at the bricks under their feet that hold them aloft. They work with this level of danger because they've no choice; look in their faces, they're tired and desperate. But perhaps there are other reasons too, other ideas of what tots up human value.

Still the traffic comes, knifing thru the snow. Despite the melee, we see very few accidents. Along with the apparent self-harm element is a kind of beautific calm. Nobody displays anger. And on closer looking, there's a shared awareness of the whole traffic mass. Cars swift around one another, avoiding the bloody mind's-eye collisions that I see everywhere. Drivers honk, indicate profusely, shout, gesticulate – they are simply letting each other know 'I'm here' - driving is a negotiation between everyone, not a race of competitors. It's a subtle plot twist that sounds like bullshit but is in fact crucial to the outcome. So, driving in Beijing is today's metaphor. It looks and is messy but it's a group activity and road rage is impossible in the midst of this vehicle juggling, you'd be the first victim.

(When we get back to the UK, Julia will intone: “I'm driving Chinese,” if the going gets stressy and she wants to talk herself into relaxing.)

A bit of backstory from the late 1970s: the Misty Poets tried to fuse collectivism with a more western individuality. There was a short springtime and then the ubiquitous crackdown, regular as seasonal change. Which is where Beijing road rage actually makes its entrance, in tanks. Meantime, Julia and I watch the careening cars for a safe moment to cross the road and I wonder what our lives are worth on this big abacus.
Posted by Philip Davenport at 10:59