Saturday's workshop was a ball of energy and excitement, with a tinge of sadness dancing at the edges. It was our last making session.

It feels sad partly because we've grown attached to this little gang and have started to know them and their lives more deeply; it's also sad because at precisely this point their making has become strongest. They've relaxed into the process and now the work they're producing mirrors their own situation, giving them a chance to know themselves (or potential selves) in a different way. It is a very powerful psychological tool to be able to rewrite the script we've been handed in life. Making art allows people to dream different versions of 'me', even contradictory versions. For someone who has a family role as demanding as 'carer' it can be valuable to try on other personae, to look at the unacknowledged creatures under the surface.

We started the day writing creature specimen poems for jam jars, to be placed around the museum. I'd prepped 'PICK ME UP' stencils for the labels, cleaned and scraped a multitude of jam jars, so felt happy to sit back and let Phil lead on the poetry making. We took inspiration from the wonderful, lugubrious cases of taxidermy that surrounded us in the art room and pondered what creature you would place in a container? The group conjured up a delightful mix of snakes and rabbits to spiders, through to flesh-hungry zombies. Phil asked a series of questions about these creatures, so that they described bottled emotions and finally morphed into poems.
The young carers, not content with simply stencilling the words Pick Me Up on their labels, added their own instructions, warnings, sly jokes. For some of the children a highlight of the project was finding a location for these poem/artworks amongst the museum displays.  'It's a real privilege to go inside the display cases'  Lauren explained

They took their time considering choices of location for their artwork, Luke's poem included a zombie curse and a fear spider, so it seemed appropriate to leave his jar in the poison collection.
Kitty had more difficulty finding a location for her piece, so I was very pleased when she decided on placing it amongst the wonderfully eccentric Victorian 'skit on cockfighting'. Kitty's sweet little homage to rabbits and the idea of home comfort counterpointed the mock courtroom of adversarial animals.

Luke continued to check on his piece 'a circle can be anything' to view the public's contributions. He also brought in a fantastic illustrated newsletter that he had made, and took time out from making art and writing poetry to interview Derek Dick the Museums Operations and Development Manager. Its been fantastic to see him grow in confidence and to take the initiative to create interactive artworks for the museum and start on a journalistic carer!

We finished more of the large scale self portraits,  with Ryan and Kitty completing their second piece of work. Each piece is unique to the individual making it, a reflection of their own story.
The customised trainers were completed with a circular text piece 'used to say I'm running away but never actually got round to it', a comment made by one of the group with one word on each shoe, we have tried a few layout ideas, but final decisions will be made on Friday at the exhibition space. 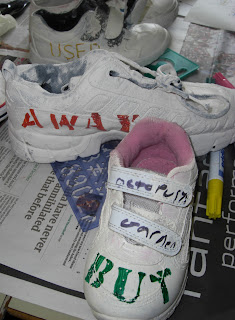