It is unexpectedly my trickster companion Koko who leads the way to the Yangtze River.

He has become my afternoon walking buddy and he complains bitterly if we delay or postpone. For the last week he and I have wandered the University Campus, which is a public park, a housing community, an old tank factory, a roller-skating meet and his sniff ground and lavatory. Our walks are a mix of stroll, snuffle and wrestling match with some idiotic (from Koko’s POV) dog obedience lessons added. He goes thru the motions of ‘sit’ and ‘go’ with contempt, pretending not to hear, or sitting down sarcastically when we’re walking.

But today Deng Chuan is coming on the exploration too and we go to Longyin Lu, setting off point for all my Yangtze searches. It turns out that Longyin Lu was the wrong road all along. One of the men coming up from the river with a rod and a pocket of fish advises us: “Follow the dog.” We let him off the lead and he dances ahead along the main road, traffic-dodging down the middle just to show off his reflexes, then zags a side-road I’ve not tried before. He steers us for 20 minutes or so, past some old cottages, then alongside a railway line, jumping the sleepers and to the top of a steep flight of stone stairs. He’s not a patient guide and although he faces off with the lorries that hurtle down the narrow roads he is also jittery, rushing us past the danger points. I’m being wary of my footing, eyes to the ground, but look up briefly and in a heart-thump there it is. 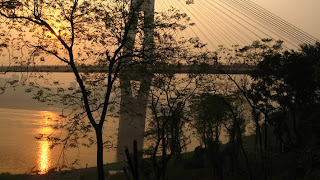 The Yangtze is on the other side of a screen of trees, a big pale wash of light in the sunset. The stone steps take us to some wooden houses festooned with drying underwear, the buildings are rickety looking structures, contrasting the brutalist power station above us. We’re at the top of a set of earth terraces, a steep field divided into vegetable allotments. Rushing between the plants are many little waterways, spanned by tiny bridges – it’s a Lilliput Holland. The water source is a murky, steaming downfall that spews from the power station at hundreds of gallons a minute. Some of this broth is also diverted into a network of fish pools. We drop down earth paths between the vegetables and then we’re among the fish, thousands of them basking in the warmed water, or jumping for food; their bodies gleam like mercury, rolling grey shapes. Koko peers in at them, clearly tempted by the potent! ial for large-scale mischief, but he gets scolded away.

Deng Chuan’s pronounciation of Koko is so different to mine that I ask her why. She tells me Koko is actually called Xiao Q, but people anglicise it for Euro-visitors to spare us struggling. As a point of pride from herein I use the slippery ‘Xiao Q’ (pronounced Shee-ow Q) which changes emphasis dependent on situation. Now muddy from wrecking vegetable beds, he leaps into the river to annoy the fishermen.

Above us are evening swallows and before us the river, with a faraway fishing boat on it that looks like a sampan (舢 舨) in an antique painting – but this vision has a sky full of apartment blocks and pollutants. The little hamlet under the power station feels ancient, poised on the lip of a moment that is already slipping, following the arc of Yeats’ gyre towards change big and possibly bad.

Deng Chuan nods at the new build apartment blocks on the other bank, she pulls a face. “The people who live there don’t speak to each other. My sister lives in a place like this and she won’t even tell people her job. Why are they keeping secrets? When I was little everyone near me knew me. Those people over there are sick but they don’t know it. They are poor because they have too much money.”

The far side of the river is losing its contours in the mist and the darkening day. A suspension bridge pours traffic towards the distant skyscrapers and overhead the swallows come close and low, trying for the meagre supply of November insects.
Deng Chuan points to the twin pillars of smoke rising from the power station chimneys: “I went to art school here. We called those my school gates.”
Posted by arthur+martha at 05:49