are my quiet time in the studio, before the collaborators arrive. I draft and re-draft the texts, frantically trying to learn the subtleties of the hanzi (Chinese characters) nipping and tucking verses, puzzling them thru, building a vehicle for them.

The pieces have been my pleasure and precipice. The idea was originally that my handwriting and the scripting of my helpers would co-exist in visual space, tho on each side of tracing paper. The paper is 2metres x 1 metre and my first major technical problem is that my handwriting, when ten times its usual size, simply isn’t strong enough. The Chinese calligraphers are handwriting athletes – they’re schooled in their lettering for years and make my ‘hand’ seem clumping. 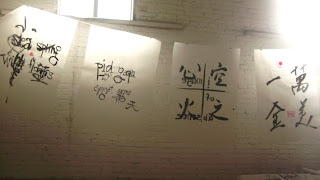 I think of the graceful copperplate handwriting of the older people Lois and I work with and wish I could call in those reinforcements.

By the time I realise that I’ll need an alternative, I’ve already lettered (and often wrecked) twenty or so large pieces. It’s triply unsettling. I enjoy my writing and suddenly my ‘hand’ has turned treacherous; I have a short timescale and limited goodwill can be asked of my volunteer helpers; I don’t yet really know if the poems work and I can’t master the means of transmission, so it’s hard to get a sense of them.

Both Julia and Tony T separately flag up the problem. The solution is simple – to use English alphabet stencils. But tracing stencil letters means sacrificing any spontaneity on my part. Stencils are also hard to find – I spend half a day scouring art shops in my district by the art college, and then the city centre – I only turn up English lettering stencils that are 1 cm high. My dad finds a sidestep around the problem in the course of our weekly phonecall – “Print your own letters, then trace them.”

I re-draw my tiny stencil letters ten times their original size onto a template I can trace from. It takes a full day to do this and as insurance Deng Chuan orders a stencil set over the internet. As added insurance, my sister Finella hunts stencils in the UK and posts them.
Posted by arthur+martha at 04:38