Sitting opposite my first Chinese pagoda experience, at Qi Xing Gang. The sun is being our friend, I’ve a bei of green tea and am sat on plastic garden furniture in an old fort surrounded by the people of Chongqing, relaxing among the skyscrapers. The fort is stepped up along the contours of a typical CQ hill topped by an elaborate 4-storey pagoda that’s peeling paint. It towers over us, and the skyscrapers over it. 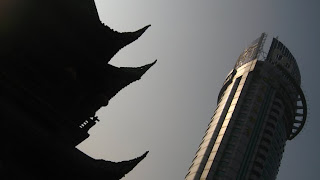 People are playing cards next to me, newspapers are being read, street traders are yelling below us and the ear-cleaner is plying his trade, ringing his scraping tools together like a bell. He wears a surgeon’s mirror-light in the centre of his forehead, a third eye. Oddly, no one is playing mah jong – my little square off Huang Jue Ping Street will be rattling to the sound of the counters by now. Apart from the pagoda, this place reminds me of nothing so much as Katsouri’s sandwich bar in Bury Market where people gather to eat arguably the best sandwiches in Britain, smoke, gossip and drink excellent coffee sitting under an awning to escape the Manchester rain. The luxury of good food completes the experience, fills the gaps in the other pastimes. CQ residents are also accustomed to the rain and like Mancs they grab the sunshine when they can. S! o the fortress is busy with relaxation, the green tea stall is doing excellent trade.

The pagoda is stupendous, a thing that designed to overwhelm – like European cathedrals, its lines tweak perspective and because this one is on a plaza approached from below, it looms very effectively – even if it is ersatz ancient. The curves of the roof recall curved horns on an antique warrior’s helmet. Huge paper globe lamps hang from the eaves, outsize droplets. Guarding the four corners of each level are the heads of mythic beasts, like gargoyles. One level is phoenix-ish bird heads, maybe Huang the female dragon consort, at another level snake heads with stone faces so ferocious they seem to spit anger, at the top, dragon heads lord it. At first look, they seem to have mouths full of frills, but then I make a guess that these are teeth of fire and the four dragons (dragon the male is Feng) wear a necklace of flames. The! mythology of the dragon is more complex here than our general understanding in the West. Perhaps the Church suppressed all but their propagandised evil reptile? A book about the layeredness of Eastern dragonology has been written by Professor Qiguang Zhao. I’ve heard that Hai Zi was holding another of the Professor’s books – one about Joseph Conrad – when he jumped to his death in front of that train in 1989.

The green tea starts to settle my stomach. Last night I again broke my abstinence from the street vendors’ food stalls. The work had been bothering me again and I ate and drank wine in a little burst of self-destructive petulance, knowing I’d pay for it in stomach cramps and the rest later. But I also have an optimistic streak that Julia sweetly nurtures and today the problems seem to solve themselves. The air suffuses with the delicate scent of green tea and occasional cigarette smoke from the card players.
Posted by arthur+martha at 02:11