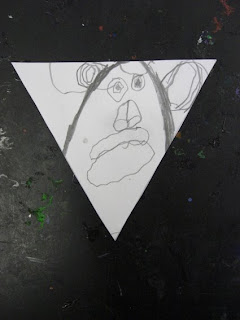 As part of the 'Eyebright' pilot project during our artist residency at Delamere Forest School we looked at the 8 Stages of Genocide, for direction and inspiration.... Stage two is Symbolization:

SYMBOLIZATION: We give names or other symbols to the classifications. We name people “Jews” or “Gypsies”, or distinguish them by colors or dress; and apply the symbols to members of groups. Classification and symbolization are universally human and do not necessarily result in genocide unless they lead to the next stage, dehumanization. When combined with hatred, symbols may be forced upon unwilling members of pariah groups: the yellow star for Jews under Nazi rule, the blue scarf for people from the Eastern Zone in Khmer Rouge Cambodia. To combat symbolization, hate symbols can be legally forbidden (swastikas) as can hate speech. Group marking like gang clothing or tribal scarring can be outlawed, as well. The problem is that legal limitations will fail if unsupported by popular cultural enforcement. Though Hutu and Tutsi were forbidden words in Burundi until the 1980’s, code-words replaced them. If widely supported, however, denial of symbolization can be powerful, as it was in Bulgaria, where the government refused to supply enough yellow badges and at least eighty percent of Jews did not wear them, depriving the yellow star of its significance as a Nazi symbol for Jews.
Posted by arthur+martha at 03:04