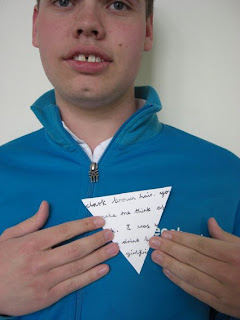 Day three at Delamere Forest started with some confusion – a policeman had come into the school to give a talk on bullying and so the first session was cut to two people. The resulting pieces were interesting but something of a diversion, and a little distracted.

Y wanted to pursue his longer poetic ideas – and brought with him a mix of great dynamism, a restless intelligence and compulsive need for attention. He is sharp, insightful and full of the desire to create - either art, or chaos - fortunately for us, he voted for art. It felt like he was not only making art with us, but also making a role, constructing himself as a possible artist. K meanwhile launched into making nine word, three line forms which were caged in a grid. This was a neat little idea, which we are appraising and have put to one side for later consideration. K then started on writing the headings of the eight holocaust stages. Throughout our time he poured his effort into making badges with us; I was later told that his attentiveness was unusual and a big compliment.

The next session was interrupted by an argument between two pupils, one teasing the other – a poisonous little spat which wrecked the creativity of one person and soured the atmosphere.

The main breakthrough of the day came with the next set of poets who worked on love poems. They struggled against embarrassment, sarcasm, the urge to cover their vulnerability and a basic fight with the inadequacy of words themselves. The results were extremely moving and worked fabulously when cut into triangles and worn as badges – they were coy messages, given an edge by the context they’d been put into.

The afternoon sessions were low key and relaxed but did not really produce any great shifts in the project. Unfortunately, the last session ended in tears because I inadvertently cutup someone’s artwork – clumsy and done because of rushing the end of the day – it was a sad little postscript.

The school is a crucible for intense feelings to cook to temper level. It is several times over sealed away from the outside – it is in a secluded place, many occupants live there for most of the year, the pupils are categorised as having ‘special needs’, the school is accentedly Jewish and therefore apart from the educational mainstream. Finally, the students are suffering the delights, diversions and horror of being hormone-ridden teenagers. All of these things gather together and multiply each other effect. We arrived into the midst of this as artists with the deliberate intent to stir things up – and we became a catalyst.

Interpersonally, the pupils are often very kind to each other, and are strongly guided toward supporting one another. But the very nature of their issues force a clash against each other’s needs. Someone who has a racing mind and a short attention will conflict with someone else whose thought processes and comprehension are much slower. But some of the less hyper young people can deal with change better than their faster companions who cannot cope with new faces and possibilities.

We were tired by the intensity of the atmosphere at the school – and had brought some of our own worries along too. A pair of pretty battered arthur+martha artists had our tea with the school, bid our farewells and slipped off to the B+B for well-earned walks in the country and a kip.
Posted by arthur+martha at 05:22

I left Delamere in July 2008, so I can certainly associate with the last three paragraphs. I had many issues with the location of the school, mainly due to the fact it restricted my ability to prove my independence, for example it wasn't possible to nip out and buy a loaf of bread or go to a football match as the school is in the middle of nowhere and has poor transport connections. Whenever I complained, the response I usually got was something along the lines of “oh, but isn't the area beautiful” or “the fresh air does you good”, but I would definitely have preferred the school to have been located in Manchester, Liverpool or even better London, although I can guarantee that if it had been in London I would have made at least one attempt at running away! I also agree with the point that it “is a crucible for intense feelings to cook to temper level”, because if two boarders get into an argument with each other then it is not possible for them to look forward to seeing the back of each other at 3:45pm and they will probably take their argument into care time.