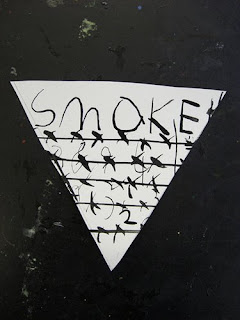 Our second day began promisingly with an excellent session that grew out of a discussion about the holocaust. The students were the oldest group we’d met and they were well-informed and impassioned about the subject.

They inspected yesterday’s work and decided that it wasn’t communicating the message clearly enough. I suggested that they try making some pieces that they felt would bring some teeth to it all and they set to. After initial misgivings and rebellions they settled into making a powerful sequence of works that were striking, subtle too. Blending numbers and the iconography of the concentration camps, they came up with a set of works that had great clarity.

Two of the standout pieces used a grid of barbed wire for a template and morphed the barbs into numbers. One of them simply had the word ‘smoke’ overwritten onto the design. This particular artist was S, who had become interested in the holocaust because one of his relatives was a camp survivor. Through them he had met other survivors and so the history for him was very alive. His badge became a talking point for many of the teachers who dropped in.

Next we worked out in the playground and the students drew chalk triangles into which they wrote their names as number sequences. It was energising to get outside and the group loved being able to transgress by ‘vandalising’ the ground. In particular, H adored the naughtiness of it. When we came back into the classroom she was fairly dancing with glee and filled with energy.

Y joined our group. He’s one of the older boys, thoughtful and insightful – and more than a little sad at the future in store for many of his companions. “What chance has a 19 year old who can’t tie their own shoe laces, cant put on their own clothes, got in the real world? … Give the kids here as much fun as is possible, because they aren’t going to have much when they leave.”

It is very easy in this environment to pick up the convenient diagnostic labels (ADS, autism, etc) that are provided for us and use them as though they were signifiers of character or identity. How gruesomely ironic it would be to embark on this project - also about the labelling of people - and slip into those habits. And yet how easily names stick, and what useful weapons. At a recreation session one of the kids used the word 'Downs' as a putdown for a fellow student. He was instantly reprimanded, but the sting of it stayed in the air. Part of the reason of course was so that the insulter would distance himself from his fellows and the shame of being labelled 'special'.

In the afternoon we tried some collaging, and some charcoal work, which looked appealing but again strayed from the main thrust of the collection. As Lois said, it's like it needs glue. Perhaps we will find it tomorrow?
Posted by arthur+martha at 02:57

Although I left Delamere in July 2008, I have to say I am stumped about who the “19 year old who can’t tie their own shoe laces, [and] cant put on their own clothes” is, although I am fairly confident who 'S', 'H' and 'Y' are. I won't give their names as I am sure there is a good reason why Philip and Lois have used just their first letters. I remember that just before I left the headteacher, Mr Burman, introduced me to them and they sat on my lunch table, although I was quiet as I had – and still have – no social skills, and I tend not to speak to people who I am not familiar with.

Philip and Lois certainly did a great job in summing up and analysing the type of place Delamere is and its atmosphere. When I was there I often wondered what people thought of me and I would have loved it had someone analysed me, as has happened with Y. I can only guess that the person who he is trying to describe is not actually 19 as the only 19-year-olds who I know that are still there are both independent and should do well in life. I really hope that the pupils will go on to be as successful a person as they can when they leave. I believe that Y's personality has been summed up well.